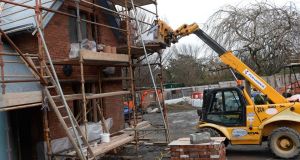 Construction activity has increased every month for two and a half years, the report says. Photograph: Cyril Byrne

Activity in the construction sector accelerated sharply last month as demand for industry professionals grew by up to 46 per cent. Two new reports over the weekend confirmed that, while the industry is still well behind its pre-crash peak, it is expanding quickly while wages are on the rise.

Some recruiters have also started trying to tempt emigrants back to fill building jobs. Ulster Bank’s latest Construction purchasing manager’s index (PMI) for February shows it expanded at the fastest rate since the index was launched in 2000.

He warned, however, that the sector still has a long way to go to fully recover. “Record rates of growth need to be seen in the context of what are still extremely low levels of construction activity,” he said.

Official figures last week showed construction output is 50 per cent off pre-crisis peak levels. “Following the collapse in activity during the financial crisis, the process of returning to more normal levels of activity will likely require sustained growth over many years. Nevertheless, the extremely positive results from the latest surveys suggest that there has been a major pick-up in recovery momentum early in 2016,” Mr Barry said.

The sharpest expansion was seen in residential housing projects, although building levels are still far below demand. Meanwhile, activity on big-ticket infrastructural projects also picked up.

The rate of job creation in the sector grew at the fastest level since October 2014, according to the Ulster Bank. “The usage of sub-contractors continued to increase sharply during February, despite the rate of expansion slowing slightly from the start of the year,” according to the report. “Companies recorded a sharp fall in the availability of sub-contractors, with the rate of decline the fastest since July 2015.”

Recent results from listed companies such as Grafton Group, which last week reported significant rises in sales at its Irish builders’ yards, also suggest the industry is on the mend.

Hays ran a “Back to Ireland” project over Christmas designed to tempt home construction workers who had emigrated and were back in Ireland for the holidays. It claimed the campaign had a “significant impact”.

“We were interviewing candidates right through the Christmas period,” it said.

Meanwhile, although the outlook appears positive for construction, economists say activity needs to pick up further to meet demand.

“With strong GDP and wage growth expectations in Ireland in the coming years, the economic backdrop remains positive for house building. Supply of new homes continues to fall well short of the 25,000-30,000 needed in Ireland,” said Davy stockbrokers in a recent report.