At peak, Castlelands Construction was building up to 700 houses a year and employed up to 500 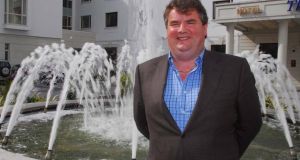 Property developer John Barry: associated locally with substantial donations and investments in the local community, in particular in relation to the new GAA complex in Mallow, but also for support for a local school and other facilities and activities in the Mallow area. Photograph: Patrick Hogan/Provision

One of the biggest housebuilders in the Munster area during the boom years, has been declared a bankrupt in the UK. John Barry, based in Mallow, Co Cork, is former farmer who started out building houses on his land adjoining Mallow. Mr Barry (55), established the Castlelands Construction Company in 1988 and grew the business until the group, at its peak, was building up to 700 houses a year and employing up to 500 people.

He is associated locally with substantial donations and investments in the local community, in particular in relation to the new GAA complex in Mallow, but also for support for a local school and other facilities and activities in the Mallow area.

His former home, Parklands, Crossfield, Mallow, built in 2003 on more than 30 acres, is currently up for sale. The 1,000sq m six-bedroom house has a 127sq m garage and includes a tennis court and an indoor swimming pool. It has a guide price of €895,000. Afforested land adjoining the house is separately up for sale.

In 2011, a creditors meeting voted to wind up Castlelands, which had substantial loans from AIB, Anglo Irish Bank, and Bank of Ireland, all of which had been transferred to the National Asset Management Agency (Nama). The group eventually went into voluntary liquidation.

At the time it was reported that Mr Barry’s personal borrowings and assets were not part of the liquidation. He told the Corkman newspaper that he was “broken-hearted”, saying he had put his life into the company and “didn’t just set out to build houses, I also wanted to help build a community”.

A bankruptcy order in the UK in relation to Mr Barry, with an address in Barnet, Hertfordshire, was issued earlier this month. Efforts to contact the former property developer were unsuccessful.

In the UK, a person can emerge from bankruptcy after one year. In this jurisdiction, the corresponding minimum period is three years.

As well as houses around Mallow, Mr Barry was associated with developments in Cork City, Midleton and Kilkenny and an ambitious development in the London docklands.

The latter project, which was to have involved funding of more than €1 billion, was being pursued by a UK-based subsidiary, Castlelands Construction Company UK Ltd, which is still in existence.

It borrowed from Anglo Irish Bank in 2006 and 2008 and its loans were subsequently moved to Nama. The latest accounts for the company show accumulated losses at the end of 2013 of £30 million.

The directors of Castlelands Construction Company were Mr Barry and his wife Elaine Barry. Among the mortgages registered against the company is one from 2005, from Lombard Ireland, in relation to an Augusta helicopter. The mortgage was repaid in 2010.

Mr Barry bought substantial amounts of land in Co Cork at the height of the property boom. In 2004, 180 acres at St Joseph’s Road, Mallow, were bought for a reported price of €40 million. The land was subsequently sold back to the farmers who sold it to Mr Barry, by Nama, for €2.25 million.

Other substantial land holdings, at Douglas and Ballinrea, Cork, were sold by Nama for per acre prices that were fractions of the amounts paid a few years earlier by Mr Barry, who had plans for very substantial developments on the lands.

The roundabout was to service a private hospital, an Enable Ireland facility and a park-and-ride facility. Planning permission for these developments was overturned by An Bord Pleanála in December 2005, but Mr Barry contacted the council and proposed that it and Castlelands work together on the project.

Castlelands was not behind the hospital but the roundabout would give it access to 22 acres of land zoned for housing which it owned.

The proposal, which included Castlelands paying for the roundabout and contributing towards the park-and-ride facility, was put to the council by way of a part 8 procedure, and passed. Part 8 procedures cannot be appealed.