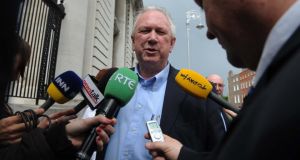 Waterford Crystal pensioners will not settle their High Court claim against the State for 50 per cent of their pension fund, a union leader has warned. The Sunday Times reports that Jimmy Kelly, head of the Unite trade union, said a multimillion-euro lawsuit would not be resolved by new pensions legislation allowing the Government to fund insolvent pension schemes to up to 50 per cent of their value where a parent company is insolvent.

Bank of Ireland buyback
The Government is preparing to sell its special preference shares in Bank of Ireland for an estimated €1.8 billion in the next couple of weeks, according to the Sunday Business Post. Amid reports that the bank is planning to raise up to €500 million in new shareholder cash to buy back a portion of the shares, the paper reports the rest of the preference shares will be sold on directly to new investors. If the market conditions are favourable, the moves are likely to take place in the next fortnight.

Bank of Ireland is eager to buy back the Government shareholding before next March as otherwise it will cost an additional 25 per cent to do so.

CityJet sale
Talks to sell airline CityJet from Air France KLM to German group Intro Aviation GmbH have been revived, according to the Sunday Inde- pendent. The sale had been provisionally agreed last June, but talks collapsed. CityJet has been up for sales since September, according to the paper.

Google profits
Google is routing a large chunk of sales from its Google Play store through Ireland, thereby availing of Ireland’s low corpo- ration tax rate on profits from pan-European sales, according to the Sunday Times. The paper says the internet giant is using a company called Google Commerce to handle European sales from Google Play, where customers buy apps, books, games, music and so on. Accounts show sales of €57 million between April 18th and December 31st last year.

Warnings ignored
The Co-op Bank ignored repeated warnings about its precarious capital position and pushed ahead with a deal that would have trebled its size, despite evidence that it was unlikely to be able to afford the transaction, according to the Sunday Telegraph. Managers at the bank admitted to regulators five months before the lender withdrew from a bid to buy 631 Lloyds Bank branches that the size of the bank’s capital black hole made the deal impossible. Despite the warning in January, it took until April 24th for the Co-op to withdraw from the deal.