One more thing: Half the Irish business fraternity is football mad 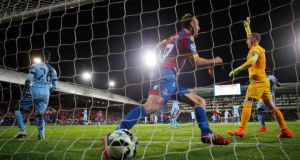 We are approaching, as Alex Ferguson once charmingly described it, the nerve wracking “squeaky bum time” of the English football season. Half the Irish business fraternity is football mad. Which executive chairs will be squeaking more than others?

Ryanair’s Michael O’Leary must be having kittens as his beloved Manchester City drop out of contention. He should be glued to his television on Sunday when City visit a resurgent Manchester United.

Forget the collapse in oil prices and Tullow Oil’s current vulnerability to a takeover. Tullow’s Aidan Heavey, an avid United fan, will also be more exercised by the Manchester derby. John Herlihy, the recently-departed Google boss, and Paul Kelly, the Irish chief executive of Selfridges, are also committed reds.

The Irish business community is awash with Chelsea fans. Barry Maloney, Denis O’Brien’s former best friend and partner at Balderton Capital, will be confident his team can snatch the title. If he gets nervous he can seek moral support from fellow travellers Mickey O’Rourke, the Setanta Sports co-founder; Ulster Bank chairman Phil Nolan; and Glen Lucken, the PTSB chief financial officer.

Spare a thought for the weeping hordes of executive-level Liverpool fans. After the apparent scouse implosion, IAG’s Willie Walsh probably doesn’t even care anymore about his Aer Lingus bid. The new Aer Lingus boss Stephen Kavanagh is a big Arsenal fan. Cheer up, Willie, you might still beat Kavanagh’s lot to the FA cup.

Patrick Kennedy, the former Paddy Power boss, is another poor Liverpool fan, as is Colm Long, the former Irish head of Facebook. That must have given an edge to the rivalry between himself and Herlihy down at Silicon Docks.

As well as Kavanagh, Arsenal can count on the committed support of Dalata boss Pat McCann, who once bought an apartment on the club’s old Highbury site so he could get the season ticket that went with it.

John Mullins, the Amarenco founder and former head of Bord Gáis, is another gooner.

Gavin Slark, the Sunderland-born Grafton chief executive, will be nervous about whether his team stay up. But there appears to be little hope for Nigel Blow, the affable chairman of Arnotts. His team, Leicester, look doomed.

1 How much state pension will I get next year?
2 Up or down – how much is your Local Property Tax this year?
3 PTSB plays down Ulster Bank talk as it sells €1.4bn of loans
4 Housing crisis here to stay in absence of big rethink, industry warns
5 Irish tech company Asavie acquired by Nasdaq-listed Akamai
6 EU bank watchdog may need to revisit payment breaks
7 How long can Government afford to keep State pension age at 66?
8 Am I crazy to consider switching to an Ulster Bank mortgage?
9 First Derivatives expects Covid-19 to accelerate growth
10 Ghost newspapers and zombie brands are stalking the media
Real news has value SUBSCRIBE