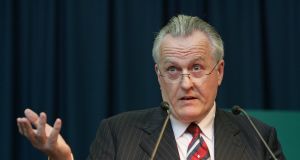 Mark Fielding: has announced his departure from Isme as its chief executive. Photograph: Frank Miller

The chief executive of the Irish Small and Medium Enterprises (Isme) association Mark Fielding is to leave his role at the end of the month.

Mr Fielding, who has occupied the position for over 16 years, will be replaced by Neil McDonnell, general manger of the Freight Transport Association (FTA).

“In leaving, I want to express my thanks and appreciation to all our friends in the media who have made my job interesting, challenging and always enjoyable,” he said.

Mr Fielding said he would take a number of months out before considering his future, although he was likely to take up a private consultancy role in the same area.

“I am sorry to leave in the sense that I have spent so long in Isme but I am really looking forward to paddling my own canoe,” he said.

Mr Fielding is an accountant by profession and worked in practice before his arrival at Isme.

His successor, Mr McDonnell, will take over the mantle of lobbying for the interests of Ireland’s smaller-scale business community.

Previously general manager of Wincanton’s fuel business in Ireland and the occupier of a similar role at Hoyer Ireland, he is experienced in the area of stakeholder policy and campaigning.