Here come the girls . . . but are they just like the boys?

What does it mean now there are more women heading FTSE 100 firms? 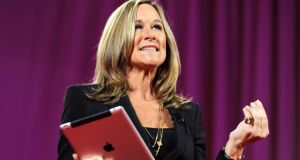 Angela Ahrendts, chief executive officer of Burberry Group, and one of only four women chief executives on the FTSE, is on her way to Apple. Photograph: Peter Foley/Bloomberg

The number of women running Britain’s blue chip companies has surged 33 per cent. But before we hang out the bunting and declare the glass ceiling shattered, that takes the total of female FTSE 100 chief executives from three to four: Angela Ahrendts of Burberry, Alison Cooper of Imperial Tobacco, Carolyn McCall of EasyJet and, the latest arrival, Moya Greene of the newly-listed Royal Mail.

There’ll be another addition to the elite club next spring, when Liv Garfield leaves BT to become chief executive of the FTSE 100 water group Severn Trent. Barring swift promotions elsewhere, the figure will slide back to four when Ahrendts quits Burberry to join tech giant Apple. Her male successor, Christopher Bailey, has already been announced.

For now, the spotlight is on Greene and the Royal Mail, who will formally join the prestigious index of Britain’s 100 biggest companies next week. Inclusion in the FTSE 100 is based on stock market value. At more than £6 billion, Royal Mail has made it with a few billion to spare.

The final decision on which company will be booted out to make room for Royal Mail will be announced tomorrow but it looks likely to be Vedanta, the latest of a number of mining firms that have lost their places this year on the back of crumbling commodity prices.

Royal Mail’s arrival in the blue chip index comes just two months after the company’s controversial stock market flotation. Priced by teams of highly-paid investment bankers at just 330p a share, its stock soared the moment dealings began and kept on rising, sparking furious accusations that the company had been sold on the cheap.

Last week the shares broke through the 600p level and closed last night at 596.5p, valuing the business at a whisker below £6 billion – 80 per cent above the price at which the government sold its 60 per cent stake. Royal Mail’s high-visibility presence as a FTSE constituent will fuel the anger over the mis-pricing of the business, something that has already been the subject of angry exchanges at Westminster, particularly given the £12.7 million in fees the seven banks handling the float have already been paid.

Bankers from Goldman Sachs and UBS, which led the float, were grilled last month by MPs. Accused repeatedly of selling the taxpayer short, they spent a lot of time squirming under intense questioning about exactly how they had arrived at their price for the shares. Their main defence appeared to be erring on the side of caution because of an impending strike by postal workers and a potential US debt default at the time they fixed the price. As we know, the debt default was averted and the company has just reached a deal with unions that removes the threat of strike action over the festive period, with an agreement worth 9 per cent to workers over three years.

Business secretary Vince Cable, who dismissed the share price surge as “froth”, has also been hauled before the committee. He is coming under increasing pressure to cancel a £4 million bonus that could yet be paid to the bankers on top of the £12.7 million they have received. So far Cable has refused to do so but has said it will not be made for months, or years, if at all. The higher the shares go, the less likely it will be the bankers get the bonus.

Meanwhile McCallis reaping the rewards of heading a successful FTSE 100 company with a £6.4 million pay package – almost double last year’s – about £4 million of which is in the form of shares, under an incentive plan. Shareholders – apart from founder Sir Stelios Haji-Ioannou – are not complaining. The company recently reported record profits and paid its investors a special dividend. The shares have more than doubled in the past year, propelling EasyJet onto the blue chip index in March. Haji-Ioannou is questioning the boardroom remuneration, saying that while the share price has risen threefold since McCall took over, take home pay of directors has multiplied 20-30 times.