Commercial rivals must look at working together to gain edge 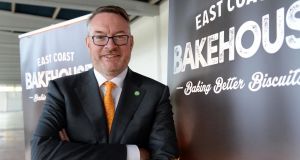 Michael Carey, managing director of East Coast Bakehouse: “By working together the food and drink industry has made good progress towards establishing a clear customer proposition for food and drink sourced from Ireland, building a reputational brand under the banner of Origin Green.” Photograph: Eric Luke

The power of “co-opetition” is evident in some business sectors in the voluntary sector and, potentially, in the structure of the current minority Government. It’s a mangled word used to describe “competitive co-operation” where firms and organisations that sometimes aggressively compete find a way to work together, resulting in a better outcome for all.

It goes beyond simply competition and co-operation, combining the advantages of both and expanding the overall size of the prize. It works well in the food sector, and it has an application in many other areas.

In the food sector co-opetition has become a proven core strategy. As an industry we face massive international competition, and scale (or lack of it) is a real challenge for even the most successful of Ireland’s food exporters.

Taken as a total, Irish food and drink exports reached a record high last year of €10.8 billion, the sixth consecutive year of growth. But even that impressive performance throughout the recessionary years still leaves the Irish food and drink sector as a minnow; taken together (as if one organisation) Ireland’s exports would rank at number 40 on the list of the largest global food and drink companies.

To compete with these massive food groups Irish businesses have sought innovative ways to achieve an illusion of scale. By working together the food and drink industry has made good progress towards establishing a clear customer proposition for food and drink sourced from Ireland, building a reputational brand under the banner of Origin Green, providing proof that Ireland is one of the most sustainable sources of food and drink in the world. This is a unique example of a national food sector branding initiative, of literally thousands of farmers, processors and other stakeholders working co-operatively towards realising a common vision.

Other examples of such competitive co-operation in food is the very successful creation of the Love Irish Food campaign, promoting the importance of local food on the domestic market and linking some complementary brands in joint advertising programmes.

Over the summer Bord Bia will establish a new initiative called the Thinking House, a shared industry resource to support consumer insight-based innovations.

When Bord Bia’s Thinking House is established, Irish food businesses will have access to similar world-class knowledge and expertise, providing another example of how an entire industry sector can act as if one organisation, again establishing that illusion of scale.

In the voluntary overseas development sector there has been some progress toward scale and improved outcomes through co-opetition opportunities. The Soul of Haiti Foundation has recently transferred the execution of its Haitian projects to Irish charity Haven, and Gorta Self Help Africa now provides back-office administrative resources to Tradelinks.

These initiatives greatly improve the efficiency of these not-for-profits while maintaining the benefits of focus and commitment of the smaller entrepreneurial organisations.

The current Irish Government structures have led to competitor political parties working in co-operation and compromise. The theory of seeking widespread political agreement on sustainable solutions to issues such as economic development, health services and the homelessness crisis is attractive and probably very liberating for the Government side. Yet it remains to be seen how this new approach works in practice.

Co-opetition has been a proven success in the food sector, and can be applied in other areas. By going beyond just competition and co-operation it can successfully expand the size of the cake, creating new growth opportunities for organisations that are not obsessed with taking market share (or votes) from one another.

Michael Carey is managing director of East Coast Bakehouse and chairman of An Bord Bia. @careyonfood