Belfast Briefing: Being a good boss is good for business 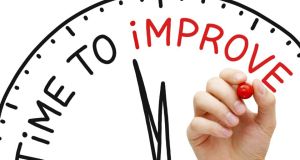 The “Made not Born” leadership and management initiative aims to transform the average boss in Northern Ireland into a business leader.

If you’re lucky, at some stage in your career you will have a boss you actually like working for. Someone you respect and who, perhaps, even inspires you to be better at your job.

Given the law of averages, the reverse will also be true.

Good bosses are, by their nature, part of the team. But what fundamentally makes someone a good boss? Does it come down to experience, ability or simply being able to charm everyone in the office or on the factory floor?

Are good bosses born leaders or can someone teach you how to be a better boss?

That is the £1 million question to which every company would like an answer. Or, in Northern Ireland’s case, it is a question worth £1.5 million (€1.77 million). Because that is exactly the amount the Department for Employment is going to spend to try to create a new breed of super-bosses.

Its “Made not Born” leadership and management initiative aims to transform the average boss in Northern Ireland into a business leader who can foster innovation, unlock the potential of the workforce, increase productivity and grow the economy.

It’s not quite your average day at the office, but Minister for Employment and Learning Stephen Farry believes that providing free leadership and management programmes for local businesses is money well spent.

“Research demonstrates that an increase of just 1 per cent in productivity, achieved through better management, can add £200 million in GDP to the Northern Ireland economy,” he says.

Eligible companies will each get up to £7,000 in funding to participate in the initiative, which runs until next March.

But according to one top boss, there is one attribute that most successful leaders possess that money cannot buy: passion.

Bro McFerran is managing director of Allstate Northern Ireland, which provides a one-stop shop of IT services for its parent company, one of the largest insurance businesses in the US. More than 2,200 people call him the boss in Northern Ireland.

McFerran is, in a roundabout way, probably the North’s first $1 billion boss.

A couple of weeks ago one of his bosses – Suren Gupta, an executive vice-president of Allstate – revealed that since the company first invested in Northern Ireland in 1998, it had saved more than a billion dollars.

“Every time we open our doors to work every day in Northern Ireland, we save half a million dollars and that is something that we don’t take lightly,” said Gupta.

McFerran has been at the top of the Allstate food chain since its arrival in Ireland. In his opinion, good business leaders are passionate about what they do.

“You have to be driven by passion. You do it for love, you definitely don’t do it for the money, and you need to have a good work ethic. You need to be prepared to work your backside off, and what you find is that good leaders are good at what they do.”

“I also believe that, to be a successful leader, you have to have focus,” he adds. “You need to focus relentlessly on the wee things; that makes the big things easy and, of course, you have to deliver. You have to have the ability to service, to make good on your promises.”

McFerran says one of the qualities of successful business leaders is their determination never to quit.

“People who are successful are persistent. They may fail on one occasion but they persist and it is okay to fail. What is not okay is to give up.

“There is no substitute for the school of hard knocks. Experience comes from making mistakes, from having the scars on your back and being able to learn from that and to help other people also learn from that.”

McFerran says he has never met a business leader who does not have a clear vision or confidence in his team.

If you’re the boss, it might also help to buy the coffee and buns on a Friday.