Webworks that didn’t work for over €4m 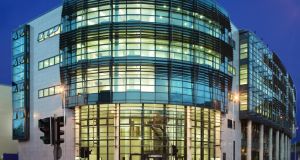 The Webworks at Fosters stret, near the main railway station in Galway

A high-quality office development partially funded less than five years ago in Galway city centre by Enterprise Ireland (EI) is to be sold off at a fraction of its original cost.

The Webworks at Fosters Street, near the main railway station, includes a full-scale coach station and underground car park as well as a partially- built apartment development which are now to be put on the market on the instructions of Declan McDonald of PWC, who was appointed receiver by the Ulster Bank.

Joint selling agents HT Meagher O’Reilly and DTZ Sherry FitzGerald are understood to be looking for between €4 million and €5 million for the attractive public-private complex which is understood to have involved an expenditure of about €35 million by not only EI but by Galway City Council and a company controlled by developer Bernard McNamara.

EI invested €4.36 million in the Webworks which it promoted as a state-of -the-art technology hub designed to provide office facilities and management support for IT start-ups and companies expanding.

Occupancy levels
The first tenant moved in in September, 2009, but occupancy levels never exceeded 16 per cent. EI says the drawn-out delays in the construction and the opening of the Galway Webworks came at a time when businesses were starting to experience severe difficulties.

EI also pumped €3.82 million into a similar public-private Webworks in Cork where 14 companies occupy 40 per cent of the available space.

Office units range in size from 34 to 136 sq m (365 to 1,463 sq ft). There are meeting rooms, coffee areas and toilet and shower facilities on each of the upper levels. All the offices are wired with Category 6e cabling and the building is naturally ventilated with wall-mounted radiator units. The upper floors are serviced by two 14 person passenger lifts.

The ground floor includes an impressive coach station which has been substantially completed with nine bays currently operating and six more remaining to be developed. A two-level car park has 148 spaces. There is a management in place to oversee the operation of both the coach station and the car park.

An adjoining site has a partially-built apartment scheme with planning permission for 33 units, most of them two-bedroom homes.

The joint agents say the odds are that a purchaser will complete the outstanding work, sell off the apartments and let the coach station, car park and the office block.