New venture for US retailer, as Smyths doubles Airside branch 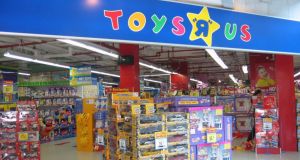 Toys ‘R’ Us has more than 1,500 stores in 33 countries, including a heavy presence in the UK market

One of the world’s leading babycare and toy megastores, Toys “R” Us, is planning to open up to half a dozen outlets in the Republic.

The expansion will be handled by a franchisee which is believed to have targeted a number of stores in Dublin and other cities which would be suitable for the American company.

The firm has more than 1,500 stores in 33 countries and though it looked at the Irish market a few years ago and decided against opening, it is now expected to announce its first outlets within weeks.

Jennifer Mulholland of Bannon, who acts for Toys “R”Us, said yesterday that it would be “premature to say anything at this stage”.

As well as toys, the company sells a wide range of baby equipment such as cots, car seats, bedding, buggies and baby food.

While Toys “R” Us is heavily represented throughout the UK, the Irish-based company Smyths Toys has also been expanding its operation across the water and now has more than 50 stores in Britain, as well as half a dozen in Northern Ireland. Smyths has just copperfastened its hold on much of the business in north Dublin by doubling the size of its store in the highly successful Airside Retail Park between Swords and Dublin Airport.

Stephen Murray of JLL is letting agents for the park which is among the top three in the country with 17 separate traders occupying more than 33,444sq m (360,000sq ft).

5 Food intolerance group to double workforce as it expands

9 Is it a matter of time before Iseq laggards attract attention of ‘blank cheque’ brigade?