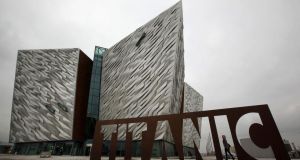 Titanic Belfast has welcomed more than three million visitors since opening in 2012.

Titanic Island Limited, which controls the group of companies working in the quarter, said pretax losses narrowed from £1.16 million in 2014. The group previously reported a £68,000 loss for 2014, down from £33.9 million in 2013. It said the previous year’s results had been restated due to a transition to the FRS 102 reporting standard.

The Titanic Quarter is one of the world’s largest urban-waterfront regeneration projects. The 161.5-acre site, on which the RMS Titanic was designed and built, has attracted more than £358 million in investment since it officially launched in 2005.

The area is currently home to 100 firms and more than 15,000 students, workers and residents. It also houses film studios, a science park and Titanic Belfast, which was recently named Europe’s top tourist attraction, coming in ahead of the Eiffel Tower, the Acropolis, la Sagrada Familia and Buckingham Palace.

The £97 million visitor attraction opened in 2012 and has welcomed more than three million people since then.

Titanic Island Limited said its current difficulties in advancing new projects with the agreement of Belfast Harbour, which ultimately owns the land, was described as the biggest impediment to the group’s future progress.

It also said the decision of the UK to leave the European Union “could adversely affect the company’s trading prospects in the short to medium term.”

According to the latest accounts, shareholder loans of £45.2 million make up a significant amount of creditors although it added that backers have agreed not to call in the loans in the foreseeable future. Titanic Island Limited said if the shareholder loans were capitalised, the group’s balance sheet would show shareholders’ funds of £7 million.

A subsidiary, Titanic Quarter Limited, incurred a £1.15 million loss for the year with accumulated losses rising to £51.1 million from £50 million a year earlier.