Retail back in vogue with Irish investors 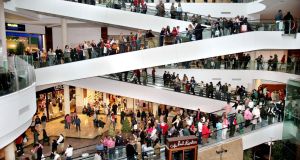 Winning number: Prime zone A rents in Dundrum Town Centre are now about €4,000 per sq m, which is almost double those in some other suburban centres. photograph: matt kavanagh

Investor appetite for Irish retail assets is on the increase, according to a new report from agent CBRE.

It claims that 54 per cent of investor spend in the third quarter of this year was associated with the purchase of retail investments. However, over the year to date, 21 per cent of the €2.2 billion invested in Irish income-producing assets was in retail. This is down slightly from the 23 per cent figure recorded last year.

Crucially, though, CBRE’s figures for this year do not include the recent sale of Project Jewel for €1.85 billion. This portfolio included three of Ireland’s most successful shopping centres – Dundrum Town Centre, Ilac Shopping Centre and Pavilions Swords – and was bought by Hammerson and Allianz.

“The ownership structure of shopping centres is now vastly different to what it once was. The most prominent shopping centre landlords in Ireland are Irish Life, Iput, Hines [which acquired Liffey Valley Shopping Centre], and new entrants Hammerson & Allianz.”

However, a lack of supply of retail space in prime shopping centre locations is fuelling “competitive tension and rental growth” in some locations.

Bernadine Hogan, who specialises in shopping centre leasing at CBRE, says prime shopping centres are resurgent given the number of major international brands entering the market. “These include Mint Velvet, Calvin Klein, Vans, Quiz, Liverpool footfall club, Aéropostale and Pandora, to name a few. This is principally on the back of improving retail sales, higher levels of disposable income and improving footfall.”

The food and beverage sector is performing particularly well in shopping centres at the moment, says CBRE. Average rents range from €484 per sq m to €753 per sq m in prime shopping centre locations, as evidenced by recent lettings to Milano, Nando’s and Arc in Liffey Valley Shopping Centre.

“The demand for food and beverage space is outstripping supply within Dublin, in particular,” says Ms Hogan. “This is supported by new entrants such as Le Pan, Five Guys, Burger and Lobster, Cow, Giraffe, Cosmo, Las Iguanas, Gaucho, Prezzo, Ask and Zizzi all looking for potential locations.”