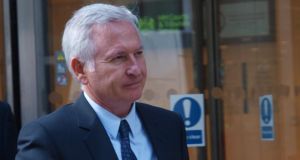 The sale of the shares to Constellation means Paddy McKillen and the Barclay brothers are dropping all action over the ownership of the three hotels. Photograph: PA

Developer Paddy McKillen’s stake in three luxury London Hotels – Claridges, the Berkeley and the Connaught – has been bought by the Constellation Hotels Group.

Qatar-based Constellation Hotels acquired Mr McKillen’s 36 per cent shareholding in the Maybourne Group, which is the owner and operator of the three hotels.

According to an agreement between them, Mr McKillen will continue to lead, direct and develop these assets.

Constellation Hotels, which is owned by Qatar Holding, the sovereign wealth fund backed by the Qatari royal family, purchased the other 64 per cent stake in Maybourne last week for an undisclosed sum, believed to be more than £2 billion.

That shareholding was bought from British property tycoons Sir David and Sir Frederick Barclay who had a 28.36 per cent interest, and Irish financier Derek Quinlan, who had a 35.41 per cent stake, ending a five-year legal row between Mr McKillen and the Barclays.

Mr McKillen was one of a group of investors who backed Mr Quinlan’s purchase of the three hotels, and the Savoy, which was sold shortly afterwards in 2004 for €950 million. The agreement between the parties gave him first refusal over Mr Quinlan’s stake if it came on the market.

However, the Barclays bought Mr Quinlan’s loan from Nama, giving them control over his holding. Of the earlier announcement that the Barclays were selling their shares, Richard Faber, a spokesman for Sir David and Sir Frederick Barclay, said the billionaire brothers were pleased the hotels were now majority owned by Constellation.

The sale of the shares to Constellation means Mr McKillen and the Barclays are dropping all action over the ownership of the three hotels, “so that there is a clear focus on investing in the continued success of these iconic hotels”, in Mr Faber’s words.

The three London hotels had been controlled by the Barclay brothers since they secured Mr Quinlan’s voting rights by acquiring his loans from the National Asset Management Agency (Nama) – rather than buying the shares which would have triggered the pre-emption rights in favour of Mr McKillen.

The Constellation Hotels Group has been buying luxury hotels across Europe over the past few years.

It paid €330 million last year to buy Le Grand Hotel in Paris from Intercontinental Hotels. In 2013 it paid £301.5 million for the 447-room InterContinental London Park Lane.

1 How I managed to cut my mobile phone bill by at least a half
2 Son putting elderly dad under pressure to sign over land
3 Fiona Reddan: Who’s afraid of Revolut? Not AIB and BOI it seems
4 Lahinch Golf Club runs out of its own cash after €3m Covid-19 hit
5 State may face €1 billion in compensation in Covid-19 case, Press Up group claims
6 Is Coveney the right man to lead Greencore out of the Covid-19 crisis?
7 iPhone 12 Pro Max review: A must-have if you like big phones
8 Ryanair warns of further cuts, Stripe to raise more funds, and AI for cows’ faces
9 UK executives rush to sell shares over capital gains tax fears
10 Workers have little idea of the cost of retirement income
Real news has value SUBSCRIBE