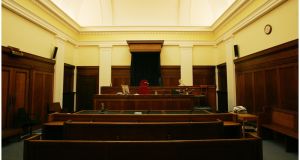 The Four Courts. The High Court was told mediation efforts to resolve the dispute had failed last month.

A real estate company is suing an engineering firm and an architects for €1.3 million for allegedly failing to provide for proper waterproofing in the basement of a Dublin city centre office block during refurbishment works.

Number 40 Molesworth Street, just down the street from Leinster House, had housed the European Commission offices until 2015 when the commission moved to Mount Street.

It employed DBFL Consulting Engineers and Michael Collins Associates architects, both Dublin based, to assist in the planning application and also to advise on how to increase the amount of habitable space in the basement.

The surveyor reported that groundwater had been identified about a foot (0.3 metres) below the surface, IPUT head of property management Niall Ringrose says in an affidavit.

Both defendants issued certificates covering structural and completion elements of the work in 2017.

Two new tenants took up leases in July and October, 2017. By early November that year, as part of the fit-out for the second tenant, groundwater was discovered.

IPUT arranged for remediation work to be undertaken with engineering aspects carried out by another firm.

Mr Ringrose says IPUT spent just over €1m on that remediation work and more than €300,000 in rent credits and in negotiated agreements with tenants in relation to the remedial works.

On Monday, IPUT’s case was admitted to the High Court’s fast track commercial list by Mr Justice David Barniville. The court was told mediation efforts to resolve the dispute had failed last month.

A lawyer for DBFL objected to entry of the matter into the commercial list on grounds of delay.

Mr Justice Barniville was satisfied the reason for the delay, including that there had been mediation, had been explained,

He put the matter back to June for further directions on how the case should proceed.