Some 180,000 square feet of offices at ‘Waterside’ enclave to get under way 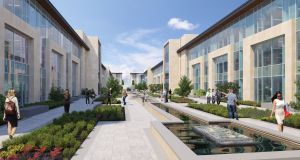 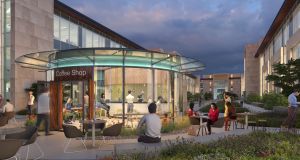 Competition on rents between ongoing suburban office developments and newly completed city centre office blocks is set to continue with the announcement that another substantial phase of top-grade offices will be developed at Citywest Business Campus off the N7 dual carriageway in southwest Dublin.

IPUT plc and Davy Real Estate are to develop a further 180,000 square feet of offices in the Waterside enclave at the entrance to Citywest, where they have already built and let 220,000sq ft of distinctive buildings.

The two funds will hold an equal shareholding in the planned €60 million extension which is expected to be ready for fit-out in about 18 months.

The huge success of Citywest, with more than 1 million square feet of commercial buildings, has been greatly helped by its close proximity to the Luas Red Line, which provides a direct light rail link between Waterside and the city centre.

The high-quality design and finishes (including stone cladding, which qualifies as a Leed gold standard) in the first phase of Waterside opened the way for leading international businesses to move there, including SAP, Fidelity, Glanbia and Astellas.

The next phase to be known as 6, 7 and 8 Waterside, will include a range of employee facilities, including showers, locker rooms, bike parking and an onsite cafe. The car parking ratio of one space per 30sq m will be maintained through the second phase. Buildings will be available to lease on a floor-by-floor basis or as a single block extending to 5,574sq m (60,000sq ft).

Typical floor plates will range from 17,750 to 19,700sq ft. Companies on the lookout for a headquarters building will have the option of taking the full 180,000sq ft.

Keith O’Neill of BNP Paribas Real Estate said the launch of the new Waterside development, together with its flexible expansion potential, would have particular appeal to occupiers looking to relocate operations from a suburban or city centre location.

Rita Carney of JLL said Waterside presented a unique opportunity for occupiers looking for grade-A office accommodation at suburban market rents, and with imposing frontage on to the N7 within a mature campus environment.