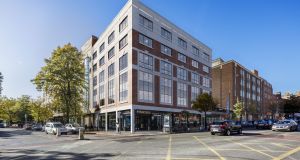 Waterloo Exchange was sold in 2012 to Davy Real Estate for €22.5 million and has since been remodelled. 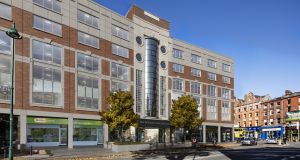 Waterloo Exchange was sold in 2012 to Davy Real Estate for €22.5 million and has since been remodelled.

This makes it one of the most significant office lettings in recent months but is slightly below the quoted rent of €532 per square metre (€49.50 per square foot) when the space first came on the letting market in May.

Waterloo Exchange, at the intersection of Waterloo Road, Upper Baggot Street and Pembroke Road, was sold in 2012 to Davy Real Estate for €22.5 million and has since been remodelled.

It was formerly St Martin’s House and has 6,967sq m (75,000sq ft) including retail units at street level and an unusually large allocation of car-parking spaces for a city-centre block.

Jazz, which has significant expansion plans for its Dublin operations, is also renting 90 of these spaces at €3,500 a year per space.

Davy Real Estate, one of the largest real-estate investors and managers in Ireland with a portfolio of more than €1.5 billion, is nearly finished upgrading Waterloo Exchange, which is now seen as one of the best-value investments in the big sell-off of distressed assets.

The refurbished block will have a new reception area and new air conditioning, windows and changing facilities.

Vacant possession on the majority of the office space was secured in January 2016 and BKD Architects were appointed to oversee improvement works.

It recently opened a new manufacturing plant near Athlone.

The Office of Public Works will continue to occupy 1,022sq m (11,000sq ft) on the ground floor of Waterloo Exchange under a lease which runs until 2022.

Its lease facilitates the Charities Regulatory Authority and the Mental Health Commission.