Whitewater Shopping Centre in Newbridge has rent roll of €11.7m 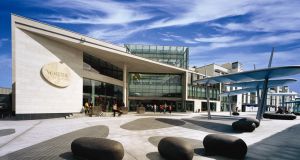 Whitewater shopping centre: top 10 tenants account for over 52 per cent of the income

With the ownership of Dundrum Town Centre now finally settled the stage has been cleared for the sale of Ireland’s largest regional shopping centre, the highly profitable Whitewater Shopping Centre in Newbridge.

Joint agents Savills and London-based Coady Supple are guiding in excess of €150 million for the centre which is 50 per cent owned by the successful property developer Sean Mulryan and the balance by the estate of the late Liam Maye.

The investment is set to give the next owner a net initial return of 7.5 per cent.

Whitewater opened for business in 2006 and has 27,788sq m (320,640sq ft) of retail space to accommodate four anchor tenants, 63 retail units and 11 food court units with seating for 650 people. There is also a six-screen cinema, 1,700 landlord-controlled car-parking spaces and 84 apartments.

Whitewater is generating a net operating income of €11.7 million of which 87 per cent comes from the shopping centre tenants and the remainder from the car park and residential units.

Dessie Kilkenny of Savills says that with a marked increase in footfall and turnover over the past two years there were now particularly good prospects for new owners being able to grow rental income in the short term. Savills were already in negotiations to lease additional units.

With a weighted average unexpired lease term (WAULT) of over 11 years, Whitewater will obviously appeal to both Irish and overseas investment funds looking for a large scale retail operation in an affluent catchment area. There are more than 300,000 shoppers within an hour’s drive of Newbridge. It also located within the Dublin commuter belt, around 50km southwest of Dublin city centre. The Newbridge/Naas area has become an important industrial hub in recent years with Intel and Hewlett Packard among the biggest employers in Kildare along with the Kerry Group, Newbridge Silverware and Pfizer. Kildare is also an important home to Irish horse racing and breeding.

The centre is anchored by Debenhams, Marks & Spencer, Zara and H&M while the other notable traders include Boots, New Look, River Island, Easons and the Odeon cinema.

Most of the leases are effectively full repairing and insuring by means of a comprehensive service charge while 25 of the tenancies incorporate turnover provisions with potential for income growth beyond current levels.

Savills says the sale of Whitewater has been keenly anticipated by domestic and global capital as well as private investors looking for scale and security but who were not prepared to compete for Project Jewel which included Dundrum. In-house research teams were forecasting continued growth in retail for the remainder of this year and into 2016, all of which had been noted by the recent surge in activity within the sector.