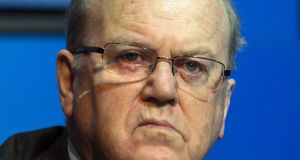 Minister for Finance Michael Noonan could not have halted the National Asset Management Agency’s (Nama) Project Eagle sale when a conflict of interest emerged in one of the bids, his department says.

A Northern Ireland Assembly committee that has been investigating the €1.6 billion sale to US company Cerberus criticised Mr Noonan for failing to suspend the auction when Nama found that another bidder, Pimco, had agreed to pay £5 million to a former agency adviser, Frank Cushnahan.

However, the Department of Finance said on Friday that the suggestion shows a “misunderstanding of the respective responsibilities of the minister and Nama’s board” under the 2009 legislation that founded the agency.

A spokesman explained that the minister does not have control over the conduct of Nama’s individual sales as the agency is only answerable to it in relation to whether or not it has achieved the best value possible for the taxpayer.

Nama sale of its Northern Ireland property loans – dubbed Project Eagle – in 2014 to Cerberus is dogged by claims that business people and politicians were to benefit from the deal. Stormont’s Finance and Personnel Committee and the UK’s National Crime Ageny are investigating the transaction.

Following the transaction, Belfast law firm, Tughans, which worked on the Cerberus bid, discovered that its managing partner, Ian Coulter had moved £6 million in fees to an Isle of Man account. He resigned when an audit unearthed the transfer.

However, the US fund had assured Nama that no one connected with the agency was involved in its bid. It maintains that it acted according to the highest standards at all times and expected the same of its advisers.

Pimco dropped out of the auction in March 2014 after telling Nama that it had agreed to pay £5 million each to Mr Cushnahan, a former member of Nama’s Northern Ireland Advisory Committee, Tughans and US lawyers Brown Rudnick.

The Republic’s Department of Finance pointed out on Friday that the criminal investigation is underway into the actions on the “buyer side” and added that there are is no allegations of wrongdoing against the State agency.

4 Why the sudden scramble to add sustainability to the C-Suite?

7 Here is the list of Bank of Ireland branch closures