Nenagh Retail Park on sale at discounted price of over €2.6m

Woodies and Aldi are main crowd-pullers at Co Tipperary park, which has seven warehouses 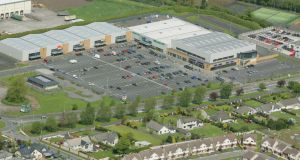 The 10-year-old Nenagh Retail Park in Co Tipperary is to be offered for sale at a significant discount on its original valuation.

Kevin McMahon of Savills is seeking offers in excess of €2.6 million for the purpose-built park which is being sold on the instructions of receivers Duff & Phelps.

One of the two sites of 2.4 acres was originally earmarked for a nursing home, while the smaller site of 0.7 of an acre was identified as a possible venue for a car showrooms.

The retail park is anchored by Woodies DIY, who provide 43 per cent of the total rental income of €240,000.

That figure is set to rise to €290,000 following agreement on the letting of one of the vacant buildings.

The arrival of the new trader will increase the income yield from 9 per cent to over 10 per cent.

Woodies have a break option in five years, but its lease does not expire until 2031.

The Aldi store next to Woodies is an important crowd-puller in the park.