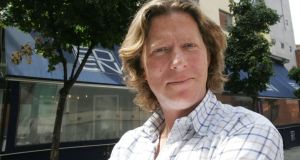 Jay Bourke: claimed he was locked out of restaurant

A landlord has agreed to allow restaurateur Jay Bourke back into a Dublin restaurant from which he claimed he was locked out earlier this week in a dispute over alleged rent arrears, the High Court heard.

Mr Bourke had said he arrived last Tuesday at the Eden Bar and Grill, South William Street, Dublin, to find a private security firm had taken over the premises and that signs had been posted in the window saying it was closed.

On Tuesday afternoon, Mr Bourke’s operating company, Zozimus Entertainments Ltd, got permission from Mr Justice Paul Gilligan to serve short notice on the landlord that it would be applying for an injunction preventing a security company, which had taken over the premises, re-entering it.

Yesterday, Peter O’Brien BL, for Zozimus, said the injunction application could be dealt with on consent between the parties.

This was on the basis of undertakings the landlord would not re-enter the premises and arrangements would be made to provide to his client keys to new locks which were placed on the door on Tuesday, counsel said.

The defendant landlord, Manoj Chawla, also undertook not to interfere with the restaurant or represent the business as being closed pending a hearing of the full action over the matter, counsel added.

In an affidavit on Tuesday, Mr Bourke said the security company arrived at the bistro at 6.15am and told a painter who was working there they were present at the behest of the Sheriff and required access to the premises.

Mr Bourke also said while there had been rent arrears on the premises in June 2013, they were discharged in full by January 15th last although the landlord disputed this.

Mr Justice Gilligan noted the matter was being dealt with on consent and said it could come back to court in April.