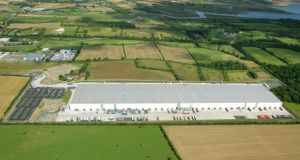 The centre in Donabate, Co Dublin, is currently producing an annual rent of just over €8.1 million

Ireland’s largest building, the Tesco distribution centre in Donabate, Co Dublin, has been sold to a South African property fund for €129 million.

The 77,385sq m (833,000sq ft) warehouse was developed by the British supermarket giant in 2007 and immediately offloaded in a sale and leaseback deal to a consortium assembled by the professional services group KPMG.

In the intervening years the rent has increased annually in line with the consumer price index.

This practice will continue for the remaining 18 years on the 25-year lease.

The distribution centre, standing on a 40 acre site, is currently producing an annual rent of just over €8.1 million and has been sold to the Johannesburg-based fund as a corporate transaction at a yield of around 6 per cent.

Robert Murphy of agents Murphy Mulhall, along with Oxygen Asset Management, acted for the purchaser.

Mr Murphy said with the larger end of the logistics market relatively undeveloped in Ireland he felt the Donabate plant would benefit from considerable capital growth in the years ahead given its modern specification and its location on the edge of the national motorway network and near Dublin airport.

Bank of Ireland provided staple finance for the transaction.

9 Confusion reigns in motor trade as politicians are blamed