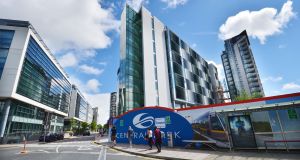 With prime Dublin city office rents at boom era peaks and associated vacancy rates at never-seen-before lows some businesses are scoping out the suburbs in search of cheaper accommodation.

Hannah Dwyer, associate director and head of research at JLL, says prime city centre rents remained steady in the third quarter of 2016 at €60 per square foot, “although there is evidence of quoting rents at €65 per square foot”.

However, suburban office rents are typically in the €12 to €30 per square foot range. That’s a rise of over 50 per cent since 2012, according to Tony Waters of HWBC. Meanwhile, vacancy rates in the ’burbs are typically in double figures.

Sandyford, Central Park and South County Business Park are the “prime” suburban office locations while Cherrywood is seeing renewed occupier interest – Irish tech firm APC Limited is doubling its space there to 30,000sq ft – given its competitive rents and access to the Luas, M50 and N11.

Top suburban office locations on the northside are close to the airport and M1/M50 zone.

Citywest and Blanchardstown are the most sought-after in west Dublin while industrial zones, like Ballymount, have the keenest rents.

Marie Hunt, head of research at CBRE, believes that the suburban v CBD rent differential is compelling enough for companies to relocate from the city centre. “There is potential to make substantial cost savings in rents by opting to locate in a suburban scheme over a city centre scheme,” she says.

Mr Moore cites his recent experience of letting offices at The Grange on the Stillorgan Road where “we secured several occupiers who relocated from prime D2/D4 locations who were attracted by the substantial cost savings from more competitive rents”.

However, there has been no stampede to the suburbs, according to Roland O’Connell, chairman of office agency at Savills. “Companies tend not to move very far from their existing location as they are more worried about losing staff than rent levels. Consequently, most suburban demand is from companies already in the location, new entrants to the market, or existing city centre companies who may open a second suburban office to appeal to a different labour pool.”

Hannah Dwyer is even blunter: “There is no evidence of occupiers who want to be in the city centre moving out to the suburbs due to either rental levels or supply constraints.”

However, there have been a number of high-profile moves to the suburbs in recent times.

ESB International is to relocate from St Stephen’s Green to the former Aer Lingus HQ in Dublin Airport at a rent of around €27 per square foot. Web Reservations (Hostelworld) has moved from Charlemont Exchange on Charlemont Street in Dublin 2 to Central Park; Ulster Bank moved from George’s Quay to Central Park; and Willis swapped Grand Mill Quay for Elm Park in Dublin 4.

Meanwhile, Google is growing its presence in Eastpoint in Dublin 3 where Oracle and Deutsche Bank are expanding back-of-house operations. Bank of Ireland Payment Acceptance has just agreed to relocate its 100 employees to Adelphi Plaza on George’s Street Upper in Dún Laoghaire at a rent of €25 per square foot. Nearby, Zurich has expanded its footprint in Blackrock.

Paddy Conlon, head of offices at CBRE, says an impending rent review or lease renewal is a “driving factor” behind a relocation decision. “We expect that there will be an increase in companies moving from the city centre to the suburbs.”

For Lisney, falling CBD vacancy rates and limited supply growth means that sourcing the right accommodation is an even bigger issue than rising rents. “Companies wishing to expand may now either have to postpone plans or settle on satellite offices outside of the CBD. We are already seeing signs of this. For example, Mason Hayes & Curran took space on Ringsend Road. This trend could also be a symptom of ‘near sourcing’, a practice more common in the UK where large professional services companies, primarily based in the city centre, locate certain office functions in cheaper suburban locations while maintaining high-profile offices in the city centre.”

But Mr O’Connell is adamant that it is very unusual for a company to move from the city centre to the suburbs and suggests ESBI’s move may be more about proximity to the airport given that its work is “primarily overseas”. A number of other agents point to the rise of fringe city centre locations as further evidence of a strong preference among companies to be near the CBD.

Suburban office rents are on the rise but the development pipeline of new stock should stabilise rates. “Preferred locations should still experience further growth of between 10 and 15 per cent,” says Karl Byrne, associate director of offices at Cushman & Wakefield. “We expect prime suburban rents in the south suburbs to rise to €30 per square foot. Rents in the west and north suburbs are close to peak levels as vacancy rates are still higher than the south suburbs.”

Tony Waters says “there is enough suburban office space in the pipeline, particularly in Dublin 18 which sees the majority of tenant demand. Ardstone has planning to build 450,000sq ft at Eden Plaza on Blackthorn Road in Sandyford. A company controlled by Noel Smyth (Wexele) has planning for 218,000sq ft of offices at Arkle Road in Sandyford while Microsoft will be relocating to their new HQ in South County Business Park over the next 12 months where developer Cyril McGuire has planning for three blocks totalling 285,000sq ft. Any new supply will be limited to those schemes with significant pre-lets in place.”

Hannah Dwyer suggests there is 580,000sq ft of space under construction in the suburbs and 3.4 million sq ft with full planning permission. “I am also aware of 1.6 million sq ft of space that is either in the ‘planning submitted’ or ‘pre-planning’ phases. The delivery of the 5 million sq ft of pipeline space in the suburbs is likely to be phased over the next three to five years and will bring a steady stream of new space to the market. Only 15 per cent of all pipeline space is in the north of the city.”