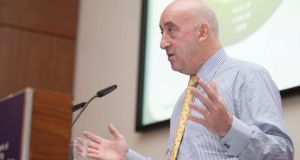 The former head of asset management at the National Asset Management Agency, John Mulcahy, is preparing to advise billionaire Denis O’Brien on his overseas property empire.

Mr Mulcahy, who on Tuesday separately joined the private sector board of Iput, an Irish commercial real estate fund with debt-free assets of €1 billion, mainly in Dublin, declined to comment.

However, it is understood he will begin to advise Mr O’Brien on some of his international property assets only after July 17th, which will be more than six months after resigning from his senior position in Nama.

Mr O’Brien’s international property assets are worth hundreds of millions of euro and include hotels, golf courses, office blocks and houses. Most of his property is in Portugal and the Caribbean, but he also has assets in other countries.

Mr O’Brien’s spokesman, James Morrissey, did not respond to requests for comment.

Iput appointed Mr Mulcahy, the former chairman and chief executive of Jones Lang LaSalle, to its board as a non-executive director.

Mr O’Brien was never a client of Nama. His friendship with Mr Mulcahy is understood to go back over many decades.

Both own homes in Mount Juliet, a 1,500-acre hotel and country club in Co Kilkenny.

Mr O’Brien has been beefing up his advisory team in recent months, as the billionaire expands his telecoms and property empire in Ireland and overseas. Earlier this month, it was reported he had lined up Bernard McNamara, one of Nama’s biggest clients before the developer exited his €1.2 billion UK bankruptcy in March, to work on the €25 million redevelopment of Canada House on Dublin’s St Stephen’s Green.

In May, Mr O’Brien appointed former taoiseach Brian Cowen to the board of his fuel retail business Topaz. Mr Cowen was minister for finance during the property bubble that required the State to set up Nama to try and bailout its banks.

Mr O’Brien is also a friend of Paddy McKillen, a successful developer, who fought a long legal battle against the Barclay brothers and Nama for control of a luxury hotel group in London.

Mr McKillen was not a client of Nama after he won a court case stopping the State property agency taking over his loans from Anglo Irish Bank, which he later repaid at par. In March 2013, Mr O’Brien and Mr McKillen won a High Court injunction preventing the Sunday Times revealing confidential material about their business relationship.

1 Retailers accused of ‘stealing business’ from rivals by flouting restrictions
2 In praise of Gogglebox Ireland, an essential service in all but name
3 Nama grants Ronan four-month extension on €160m glass bottle site deal
4 Outgoing Irish a sitting duck for Covid
5 ‘French people are pretty relaxed. They don’t pander to scaremongering or hysteria’
6 How long can Government afford to keep State pension age at 66?
7 Guinness brings out a non-alcoholic version of the black stuff
8 Intercom CEO Karen Peacock: ‘I do miss seeing people live’
9 Liam Neeson among new investors backing €100m Ireland Impact fund
10 How much will a Covid-19 vaccine cost?
Real news has value SUBSCRIBE