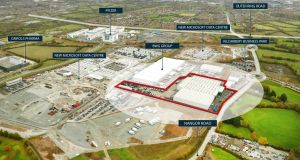 Kilcarbery Business Park, in Dublin 22: a vast distribution centre there goes up for sale today

A vast distribution centre occupied by Britvic in Kilcarbery Business Park, Dublin 22, goes for sale today at more than €15 million.

Agent Murphy Mulhall is handling the sale of the high bay warehouse built in 2000 and occupied since then by Britvic, the number two soft drinks producer in the UK.

After renting the premises from the start, Britvic decided to buy it towards the end of 2013, paying €14 million for it after it was offered for sale by Knight Frank. Britvic has now decided to sell on the facility after outsourcing its distribution business.

It adjoins the Profile Park which similarly is home to a considerable number of high technology and distribution companies including the BWG Group, Isover Ireland, Gyproc and Metroplex.

Other big name companies in the area include Microsoft which is developing a number of data centres, as well as Pfizer, Google, Takeda, Grifols, and Aryzta, the Zurich food company.

There are separate entrances for cars and heavy goods vehicles and a three-storey block of offices to the front complete with lift.

Robert Murphy of Murphy Mulhall said it expected considerable local and national interest in the distribution centre because of its high quality and location and the shortage of similar stock in the Dublin market.