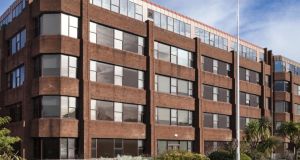 A private investor has paid €9.5 million for Canada Life House, a landmark office building in Blackrock, Co Dublin, which will show a net initial return of 8.3 per cent.

The price is a full €1 million above the guide price issued by selling agents Knight Frank.

The five-storey L-shaped block is let to Canada Life Ireland/Irish Life Assurance on a 30-year lease from 1991 that does not run out until January 2021. The current rent is €823,000.

Great West Lifeco, the parent company of Canada Life Ireland, recently acquired the Irish Life Group and now trades under the Irish Life brand. The office block is one of two prominent buildings in Blackrock village with profile on to both Frascati Road and Temple Road.

Internally it has flexible, open-plan floor plates and functions efficiently off one centralised core and one fire escape core. A data centre on the third floor is facilitated by a suspended metal ceiling and raised floors.

There is a fully fitted canteen on the fourth floor. The offices are heated by a combination of gas-fired central heating and individual ceiling-mounted cassette units. Two 10-person lifts were newly replaced in 2012.

The tenant has the use of 55 car spaces as part of the lease.