Bubble-era developer who ran up debts of €2.7bn providing an ‘excellent service’ 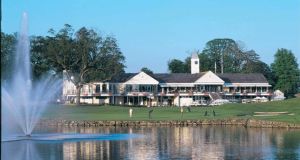 While the resort does not have full planning permission, there are proposals to refurbish the property whose value was written down by €16.2 million to €67 million in 2012.

It has hired Mr McNamara, who once led one of the Republic’s biggest building groups, as a consultant to advise on the proposals. A spokesman said he is providing an “excellent service”.

Mr McNamara was one of the most active players in the Republic’s property market during the bubble era in the last decade, running up debts totalling €2.7 billion.

He was involved in the ill-fated purchase of the Irish Glass Bottle site in Ringsend, Dublin, for €412 million in 2007, and owned numerous sites in the capital as well as the Burlington Hotel and a stake in the Shelbourne Hotel.

The mounting financial problems that resulted from the collapse of the Republic’s banking system and property market ultimately forced him to seek bankruptcy in Britain in late 2012. Almost three years before that, he stepped back from his role at the head of Michael McNamara and Co, his family building business, in order to put distance between the company and his own difficulties.

However, the construction group itself was dragged under by its own unsustainable property debts and ultimately went into receivership.

Dr Smurfit took full control of the K Club in 2012 when he bought out the 50 per cent share owned by another developer, Gerry Gannon.

Recently published figures show it lost €12 million that year. Dr Smurfit gave the resort a shareholder loan of €35 million as part of a restructuring of its bank debt.