Budget 2016: Changes will have little impact on poorest in society

Budget 2016, compared with a neutral budget, which indexes tax credits and welfare payments in line with expected wage growth of close to 2 per cent, has little impact on the incomes of the poorest quintile. Source: ESRI

Ireland’s economic recovery has seen a welcome fall in unemployment and growth in employment. As recovery has strengthened, wages have also started to grow, at rates of more than 2 per cent in 2015 and 2016 according to latest forecasts.

The starting point for our analysis – as in other years – is a budget which would see incomes rise for all households in line with this wage growth. This could be achieved by increasing tax bands, tax credits and welfare payment rates in line with overall wage growth.

We use this policy as a neutral benchmark against which to measure the distributional impact of actual policy. The default policies implied by budgetary conventions such as Ireland’s “opening budget” are not suitable for this purpose.

Our analysis uses Switch, the ESRI tax-benefit model, to provide a nationally representative picture of the impact of Budget 2016 on Irish households. The model is based on a sample of more than 4,500 real households, from the CSO’s Survey on Income and Living Conditions.

The scale, depth and diversity of this survey allow it to provide an overall picture of the impact of the budget on Irish households, which simply cannot be gained from selected example cases.

At this stage, some 36 hours after the budget, our initial analysis is able to take into account most of the major tax and welfare initiatives in Budget 2016.

On the welfare side, we take account of the Christmas bonus, increases in old-age pensions and in child benefit, and increases in family income supplement, fuel allowance and the respite care grant. We also include the increased income disregard for lone parents on jobseeker transition payment. 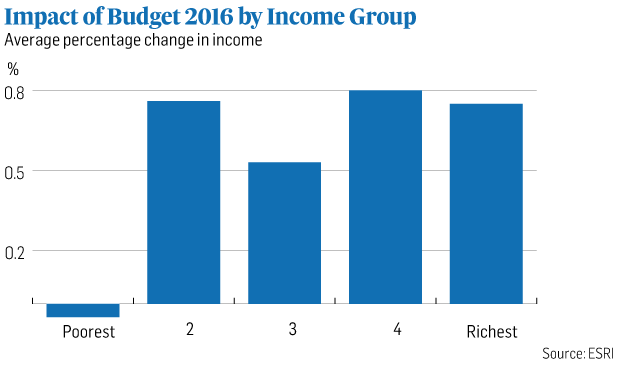 Items not included are capital taxes, the 50 cent rise in tax on cigarettes, employer PRSI changes, the abolition of the pension levy, and the introduction of paternity benefit.

Expected wage growth in both public and private sectors is now rather similar, at about 2 per cent. While we do not at this stage specifically analyse the impact of the manner in which public sector pay changes will be delivered, some of these – such as the flat-rate element to the reduction in pension-related deduction – involve a distributional element favouring the lower-paid and will be analysed at a later date. Like most such models internationally, the ESRI model examines the immediate distributive impact of the overall budget package chosen before any responses in labour market or other behaviour.

Most international models focus exclusively on direct taxes and cash benefits. The ESRI model has been extended to take account of some issues outside the tax-benefit arena. Our analysis includes the impact of the increase in the national minimum wage on the incomes of low-wage workers, but is silent on the potential impact on employers or owners of businesses employing these low-wage workers.

This is quite different from a change to a tax or benefit, where the net gains of households are counterbalanced by a change in net revenue for the Government. Our analysis also includes the potential impact of the extension of the early childhood care and education scheme, attributing a value to the places provided, based on the cost of provision, and including this as a resource which is added to parental income. While this is a commonly used valuation approach, it is also commonly questioned (as, for example, by Cormac O’Dea in a paper to the ESRI Budget Perspectives conference). A similar approach could be taken to the extension of free GP care to children, but this will require more time.

The chart shows the percentage gain or loss for each of these quintiles for Budget 2016.

Budget 2016, compared with a neutral budget, which indexes tax credits and welfare payments in line with expected wage growth of close to 2½ per cent, has little impact on the incomes of the poorest quintile.

More detailed analysis of the distributive impact of Budget 2016, and of the impact of budgets since 2009, will be provided later this year in an article for the ESRI Quarterly Economic Commentary.

One issue which has received less attention is that international experience with property taxes suggests that they work best when there is regular updating of the valuation base.

When valuations become outdated, disparities often emerge which bring the tax into disrepute – this was one of the factors which led to the demise of household rates.

Pressure to defer revaluation is common: England has deferred revaluation for its council tax for more than 20 years. In this context, the decision to freeze property tax until 2019 – likely to be in the second half of an electoral cycle – is a serious concern.

Sharp increases in market values do not mean that tax liabilities must also jump: adjustments to tax rates at local level, some of which have taken place already, could prevent this.

Have Spacs, Wall Street’s hottest craze, had their day?

Young people are bearing the brunt of this economic crisis 07:04
Bank of Ireland paves way for negative rates on accounts with over €1m 07:01
Air Corps bid for search and rescue services would result in job losses, union warns 06:56
FBD, ICG and Uniphar under fire over executive pay 06:56
Barnier’s Brexit diary, test gig joy and how Yahoo lost its exclamation mark 05:20

3 FBD, ICG and Uniphar under fire over executive pay

4 What would be the economic costs and benefits of a united Ireland?

5 Aer Lingus has ‘too many resources’ amid Covid pandemic, airline warns

6 Young people are bearing the brunt of this economic crisis

7 If I give my holiday home to my daughter what are the tax implications?

10 The future is freelance: Covid catalyses a shift in working