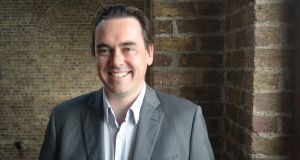 Barry McCarthy: “Our platform lets export-oriented SMEs control their own currency risk management. This is the first time there has been a low-cost and straightforward way to do so”

Every cloud has a silver lining. For Dublin-based fintech start-up, AssureHedge, it’s Brexit. AssureHedge has developed a platform that makes it easier for companies to eliminate uncertainty around their forex exposure. Brexit has provided a golden opportunity for it to showcase its solution.

“Brexit has left many companies feeling like a deer caught in the headlights of a car – not least because over 90 per cent of SMEs affected by foreign currency risk do nothing at all to protect themselves,” explains company founder and algorithmic trading systems designer, Barry McCarthy.

“Of the companies that do take protective action, the majority turn to the inefficient, expensive and blunt solutions sold by banks, not least because it’s a complex area that’s difficult for the average business to navigate. We plan to change the status quo in a big way by giving smaller businesses access to exactly the same powerful foreign currency risk tools as the largest corporations and banks enjoy,” says McCarthy, who spent 15 years as a financial markets trader in places as far afield as Singapore and Gibraltar.

McCarthy graduated from UCD in 2000 with a B Comm. He then spent four months as an intern with UBS Warburg in London on the European equities desk. “This opened my eyes to the world of high finance and I was hooked,” he says.

A master’s in economic science at UCD followed and McCarthy then joined Geneva Ireland Financial Trading. There he traded Eurostoxx 50 and Bund futures and was the top performer in its 40-strong trading team in 2004. McCarthy moved from Dublin to Gibraltar, where he spent three years as a private futures trader before moving to Singapore to co-found Blue Water Financials.

In 2010 McCarthy moved back to Ireland “largely because I was missing home. I’m one of eight children and wanted to come home, settle down and start a family,” he says. On returning home he began lecturing in financial trading while working on his idea for AssureHedge over a five-year period. The company was formally established last November and is based at the NDRC (Digital Hub) in Dublin, where McCarthy is participating in the Launchpad accelerator programme.

AssureHedge’s other smart feature is that it enables direct hedging between any two currencies. Up to now liquidity issues have restricted direct hedging to major currencies. An Indonesian company seeking to hedge the Rupiah against the Canadian dollar, for example, would have to undertake multiple transactions to do so, with each one representing an additional cost. AssureHedge eliminates this.

“On the surface we want the user engagement to be easy, but underneath it’s a complex process,” explains McCarthy. “The customer break-even quote is calculated in real time by a combination of our pricing algorithms, [which are based on actual market bid and offer prices], and an internal theoretical calculation engine. This is the euro amount that we can offset the risk for zero profit. When the customer accepts the quote, our trading algorithms will offset the customer risk via the interbank FX markets. However, all that the user sees is a simple website window. They are unaware of the technology doing the heavy lifting in the background.”

To service the home market initially AssureHedge is in discussions with a number of banks about providing them with a “white label” version of the software they can self-brand. He is also hoping to spread the word by tapping into the Irish insurance brokers network.

The company expects to employ about eight people within the next 12 months and is engaged in a funding round to help fulfil its regulatory and compliance obligations and accelerate the development of the business. McCarthy estimates the cost of developing the AssureHedge platform, which has been largely self-funded, at around €400,000. The product will be formally launched in the first quarter of 2017.

McCarthy’s feet have not hit the ground since last November. “Hard work is not the problem. What’s really challenging is the juggling. You simply never know where your attention will be pulled next. In a single day I find myself using vastly different skill sets to address issues such as regulation and compliance, financial forecasting for the business, or doing deals. This is definitely not the way to go for anyone seeking an easy existence.”