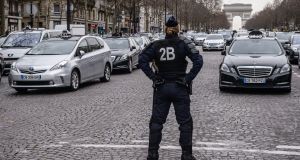 A police officer stands in front of French taxis blockading a Parisian street during a protest against Uber this week. Photograph: EPA/CHRISTOPHE PETIT TESSON

Last Tuesday, France was gripped by huge strikes, with an estimated 130,000-150,000 protesting across the country. In that age-old French tradition, a whole host of complaints coalesced into a single show of force, the marchers made up of everybody from teachers to farmers, from police officers to air traffic controllers.

But much of the international attention focused on the large number of taxi drivers protesting against ride-hailing service Uber, with some 2,000 taxis blocking roads in the Paris region, burning tyres and generally paralysing traffic across the country.

The protests prompted French prime minister Manuel Valls to hold an emergency meeting with taxi and transport officials, after which he promised to “put an end to unfair behaviour and guarantee the conditions of loyal competition”. Sounds like a big win for the taxi drivers.

The anti-competitive regulations that the taxi drivers seek to maintain also make it notoriously difficult to hail a cab in Paris, so it is easy to dismiss their complaints as another instance of the French tendency for protectionism, that reflexive defence of the status quo that has contributed to the supposedly sclerotic nature of the French economy.

But it’s not as if it’s only French taxi drivers that have been out protesting against the rise of Uber – last year similar protests were seen in every corner of the globe, from Brazil to India.

Uber is the paradigmatic example of the “on-demand” economy, which threatens to precipitate a massive disruption to numerous traditional business models, all made possible by the ubiquity of the smartphone. Already, there are numerous Uber equivalents in other areas, from food delivery to home repairs. Uber itself is not going to stop at transporting people – recent reports suggest it is going to introduce a food delivery service in 10 US cities from March. And another on-demand service, for web designers, is even called PeoplePerHour, a name that gives a rather unvarnished impression of the transactional realities involved.

Uber is an economist’s dream come true, a real-world experiment in dynamic measurement of supply and demand: customers signal demand through the app, and when demand goes up, so does the price, which in turn increases supply, as extra drivers determine it’s time to get out on the road when the surging price of a ride makes it worth their while. The clever elimination of inefficiency from the transport market hints at the sort of transformations we are likely to see in all sorts of markets in the coming years, and with that, we are likely to see an awful lot of resistance from incumbents.

Of course, try explaining that semantic difference to the Paris taxi drivers out burning tyres and blocking motorways. They are, clearly, feeling disrupted, hence their resistance. In years to come, then, will we paint these obstructionist taxi drivers in Paris and Delhi and Sao Paolo as latter-day luddites, fighting the tide of inexorable technological change out of ignorant self-interest?

Perhaps, although I suspect their resistance will be seen as signifying something more important than merely protecting their own incomes.

The larger implication of Uber and its on-demand peers is the creation of an increasingly “on-demand” workforce, who don’t have any of the rights or security of previous generations of workers. Uber and its rivals such as Lyft have vociferously fought to ensure its drivers are categorised as independent contractors rather than employees, with mixed results in different jurisdictions.

That sophisticated lobbying effort will be replicated outside the US, no doubt, and once those precedents are established, they will also apply to other “on-demand” workers.

This Uberisation of the workforce might be described as the problematic “ethiconomics” of the on-demand business model. Sure, significantly greater efficiencies will lead to economic growth in the aggregate, but if it comes at the expense of labour security, the allocation of that economic growth might be very uneven indeed.

At which point, perhaps we will look back at the taxi protesters not as self-interested luddites naively fighting the future, but as principled activists taking a stand for society at large.

Almost 600 social and affordable houses given green light in Dublin

1 Majority of employees don’t want to return to pre-Covid working patterns
2 Homeworking is depriving me of juicy gossip
3 If tourists are such pariahs should we not be testing them on arrival?
4 The $6bn judgment pitting Nigeria against Irish businessmen
5 ‘My rent here is so low it’s a joke’
6 Primark rejects £30m bonus for bringing back staff
7 State to auction €750m worth of Irish treasury bills
8 Investors in Irish solar energy fund in line for €20m payout
9 Norwegian airline sued in Dublin by inflight caterer
10 Tobacco giant’s menthol-ban substitutes take 5% share of Irish market
Real news has value SUBSCRIBE