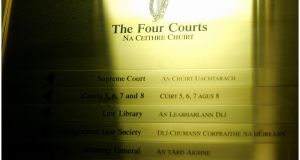 A businessman operating a vegan café and business premises in Galway city has taken a High Court challenge arguing that his prosecution on charges arising from selling certain hemp products is invalid under the Constitution and EU law.

A businessman operating a vegan café and business premises in Galway city has taken a High Court challenge arguing that his prosecution on charges arising from selling certain hemp products is invalid under the Constitution and EU law.

James O’Brien says the cannabidiol (CBD) products are like CBD oil but in the original plant form, their level of tetrahydrocannabinol (THC) is 0.2 per cent or lower and they are 100 per cent non-psychoactive.

He claims the Misuse of Drugs Act 1977 cannot be applied to CBD or CBD derivatives where the level of THC is 0.2 per cent or lower, he should not have been charged under that Act and that his prosecution is constitutionally invalid and in breach of EU law.

An Advocate General of the Court of Justice of the EU had ruled last month, in a case referred by a French court concerning a prosecution for selling electronic cigarettes containing CBD, that prohibiting imports of CBD oil from other member states is contrary to EU law, Mr Justice Charles Meenan was told.

The judge granted leave on Monday to Micheál P. O Higgins SC, for Mr O’Brien, to bring judicial review proceedings aimed at preventing his prosecution on charges under the 1977 Act.

The case is against the DPP, the Minister for Health, the government and the State.

Mr O’Brien, of Portcarron, Oughterard, Co Galway, is the owner and operator of a café and business premises known as Little Collins CBD Dispensary at Abbeygate Street, Galway.

The business is operated through Brontosaurus Dispensary Ltd and sells CBD and hemp products as herbal remedies, teas, oils, ointments and butter.

In an affidavit, he said his business is reputable and well run and was profitable until events of May 2019, when his home and business was searched by gardai.

Gardai removed about 20kg of material, most of which was leaf tea, he said.

Before he opened the business, he wrote to the Superintendent in Galway city in relation to the products to be sold and a Garda Sergeant later visited the premises. He said he was not advised about any concerns about the content of the products to be sold and the Sergeant specifically told him, as long as the THC content was less than 0.2 per cent, “all would be fine”.

Mr O’Brien said he had at all material times imported products from reputable sources and was provided with requisite certificates of authenticity for those. He had also sent them for testing to JHG Analytics in Waterford which confirmed all the products were below 0.2 per cent for THC.

He claims his solicitor was later informed by An Garda Siochana, if the CBD products contained THC in any quantity including trace amounts, they are considered controlled drugs under the 1977 Act.

In August 2020, gardaí contacted Mr O’Brien informing him they were instructed to charge him with four offences under the 1977 Act. The charges related to him being found in possession of “hemp trim” and “cannabidiol” (CBD) products, he said.

Mr O’Brien says he has not contravened the 1977 Act, his prosecution is bad and misconceived in law and should be restrained. He claims the farming or production “and by logical extension”, the possession of hemp with a THC content of less than 0.2 per cent is not illegal or impermissible under EU law and that Irish law is incompatible and contrary to the relevant regulations.

The relevant provisions of the 1977 Act are, he claims, invalid under the Constitution in that they fail to respect his rights to liberty, property, privacy, good name and to earn a livelihood .

He also claims the provisions are incompatible with his rights under the European Convention on Human Rights.