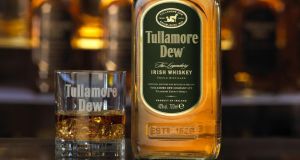 Whiskey production has returned to Tullamore for the first time in 60 years.

William Grant, the family behind the Tullamore Dew brand, has opened a new €35 million distillery on the outskirts of the town.

According to its owners, the distillery was built to meet the growing international demand for Tullamore Dew, which is now the second biggest Irish whiskey brand after Jameson.

William Grant, which employs 90 people at its locations in Clonmel, Dublin and Tullamore, acquired the whiskey brand, along with three other spirits, from drinks group C&C in 2010 for €300 million.

The new distillery will give it control over its own whiskey supply. Currently, it sources whiskey for Tullamore Dew from rivals, including the Pernod Ricard subsidiary Irish Distillers.

After two years of construction, Minister for Agriculture Simon Coveney today officially opened the Tullamore distillery by turning on the spirit safe to let the first spirit flow from the newly installed stills.

“Irish Whiskey is a star of the Irish food and drink industry and the fastest growing spirit on world markets,” he said.

Located on a 58-acre site in Clonminch on the outskirts of the Co Offaly town, the distillery draws on spring water from the nearby Slieve Bloom mountains, and will be capable of producing the equivalent of 1.5 million cases of Tullamore Dew annually, when fully operational.

The move brings whiskey production back to Tullamore for the first time since the original distillery closed in 1954.

The new plant contains four hand-crafted copper stills, designed to resemble the original stills from the old Tullamore distillery, six brew house fermenters each with a 34,000 litre capacity and warehouse storage for 100,000 casks.

The first bottles from the plant will not be available for sale until 2018.

“ This new facility will secure our future production demands for the rest of the century as Irish whiskey embarks on its most exciting chapter yet,” chief executive of William Grant, Stella David, said.