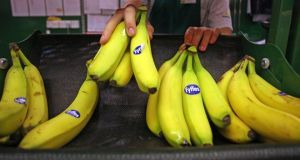 Pretax profits at fruit distributor Fyffes rose by 25.3 per cent to €39millon last year as the group reported its sixth consecutive year of growth.

“Fyffes is pursuing necessary increases in selling prices in all markets in response to the significant strengthening of the US dollar against the euro and sterling in recent months. The group is focused on continuing to grow the business and is actively pursuing a promising number of attractive acquisition opportunities,” said chairman David McCann.