Pioneers, settlers and how to get ahead in brewing 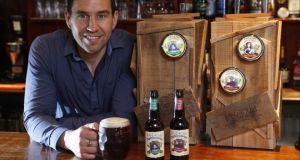 Rye River Brewery, based in Co Kildare, produces a number of beers under the McGargles brand. The group, established in 2013, employs 47 people and exports to 15 countries.

What distinguishes your business from competitors? Unlike many craft brewers, we’ve all come from the beer industry. I set up the Molson Coors business in Ireland while the other co-founders – Alan Wolfe and Tom Cronin – are ex-Diageo and ex-Heineken.

Between us ,we’ve brought all the experience gained in dealing with customers and building brands, and combined that with a cracking brewing team. We’ve tried to build a brand as well as some great beers whereas a lot of other craft guys focus mainly on the brewing side initially. We’ve tried to create accessible beers aimed at people who drink Heineken and Smithwicks, but want to try craft beers.

What has been the biggest challenge you’ve had to face? Probably setting up and getting financing into place. It took a few years to get financing from the banks, although things have gotten easier on that front. Another challenge has been keeping on top of our growth and managing that. We’ve been growing at an average of 30 per cent per month and that creates as many difficulties as not growing.

What is the biggest mistake you’ve made in business? The biggest mistake was not with Rye River, but when I was younger. Years ago, I had my own business with my brother and that was a mess. We owned a few restaurants, a bar and a nightclub. I lost a fair bit of money on it because I’d grown up in the business and went out on my own thinking I knew everything. I look back on it now and think that I learnt more in that two-year period than I would have done at college, so it set me up to build my career.

What was the best business advice you’ve ever received? An old boss of mine used to say that pioneers get shot while settlers make money. That always sticks in mind when I’m looking at how to grow the business. We like to lead a little bit but we also look outside Ireland to see if there’s stuff that’s being done that we can do well.

And your major success? We’re really shocked at how quickly we’ve grown. We didn’t plan to have this number of staff or to be in so many export markets at this stage. It’s been a rollercoaster ride. There have been tough days, but plenty of great ones too such as when we won eight medals at the International Beer Challenge in London. The first time we had one of our beers in New York was also pretty special.

Who do you most admire in business and why? Steve Jobs and also David Jones, who ran Next for years. I like Jobs’ thinking that something is either brilliant or it’s not. Jones was an ex-finance guy who had this great attitude. He said he’d never fired anyone for making a decision, but had fired plenty for not doing anything. The arrogance of Jobs and the balance of Jones have been big influences.

What advice would you give to the Government to stimulate the economy? The Government needs to simplify what’s on offer to SMEs. We’ve looked into getting Government-backed loans and found the process hugely complex and have pretty much given up on them.

Most of the banks don’t want to deal with them and, overall, it feels like we’ve got all these little schemes that seem a little half-arsed. If the Government is really committed to a sustainable economy, it needs to make it easier for small businesses to access funding.

Do you think banks are open for business at the moment? We’ve seen a huge shift in the last few months and while it is still not where it should be, the situation is improving. Banks aren’t in any kind of risk mode, but if you’ve got a good business plan and you understand your numbers, they’ll listen.

How do you see the near future for your business? We’ll be at exhibiting at the Alltech Craft Brews & Food Fair in the Convention Centre in Dublin this week, which we’re looking forward to. And Chicago is just about to go live for us and so is the UK with a full launch coming up in the coming months. We’ve also signed an agreement with Disney in Florida and we are looking at a couple more export markets. We’ve just secured €1.1million in financing to put into the brewery to aid our expansion plans, so it’s going to be a busy few months.

What is your business worth and would you sell it? I wouldn’t sell it and it’s only worth what someone is willing to pay for it. We’ve had some interest but we’re nowhere near being where we’d consider selling. We’d like to build a strong international beer business and pass it on to another generation and fingers crossed, that’s what we’ll do.

In conversation with Charlie Taylor