Farmers face heavy income dips and many may go out of business, milk suppliers warn 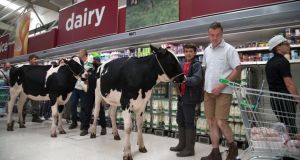 About €1 billion will be drained from the Irish economy this year as a result of falling milk prices, the Irish Creamery Milk Suppliers Association (ICMSA) estimates.

The group said farmers were facing income swings of up to €40,000 as a result of the current market slump and that many would be run out of business if the European Commission failed to take decisive action to support prices.

At last week’s Global Dairy Trade auction, which sets the main reference price for products internationally, dairy prices crashed to a 12-year low having more than halved over the past year.

Constraints on demand from larger dairy buyers linked to a slowdown in China and an import ban in Russia were pinpointed as the main causes.

The latest official figures here put the average price per litre paid to farmers at 28 cent, down from 34 cents in January and a high of 43 cents last year.

With the cost of production in Ireland put at 25 cent a litre even before labour costs, many Irish farmers are now losing money on the milk they sell.

The crisis has prompted calls for a rise in the EU intervention price for milk but EU agricultural commissioner Phil Hogan has so far resisted such a move.

ICMSA deputy president Pat McCormack, however, told The Irish Times that the idea of a repayment holiday did not deal with the underlying problems, noting the association was estimating a loss in dairy income and wider dairy-derived spend of about €1 billion on 2014 levels.

“The Government and the commission seem to think that this kind of dive in price was somehow natural and unavoidable and that matters would quickly right themselves in due course. Both assumptions are false,” he said.

“The idea that Irish milk suppliers – or indeed any nation’s milk suppliers – will be able to plan and operate on the basis of the kind of €35,000 to €40,000 annual income swing we’re going through right now is a terrible delusion.”

Farming leaders in the UK held an emergency summit yesterday as protesters blockaded distribution centres and brought cattle into supermarkets to raise awareness of their plight. In several protests, farmers removed cartons of milk from shops including Asda, Morrisons and Lidl before paying for it and taking it away, or dumping it at the checkout.

The Irish Farmers’ Association warned that farm incomes are under “severe pressure” this year. In its pre-budget submission, the IFA said it was essential for the Government to stand by its €580 million funding commitment to the Rural Development Programme.

Other items in the group’s submission included €65 million for the suckler cow herd provided through the Beef Data and Genomics Scheme and €25million for a targeted payment to the national ewe flock.

IFA president Eddie Downey said: “When the economy in this country was in trouble, the Government looked to Irish agriculture. Now that the economy is recovering, we hope the part rural Ireland played in the recovery won’t be forgotten.”