IFA to hold elections for all senior positions 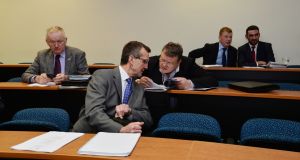 The Irish Farmers’ Association (IFA) will hold elections for all senior positions in April after its executive council agreed in principle to the move.

At a meeting on Tuesday night, members of the 53-person council agreed in principle to a proposal from the organisation’s executive board that it stand aside two years early to facilitate a full round of elections.

The motion cannot be officially ratified until the council’s next monthly meeting, to allow for a period of consideration.

However, it is anticipated that elections to fill the vacant position of IFA president and appoint a new deputy president, chairman and four regional chairmen will be held “before the end of April”.

The motion was seen as an olive branch from executives to grassroots members, following recent controversies involving the pay and severance packages of former secretary general Pat Smith.

It proposed that the board’s current four-year term be broken into consecutive two-year terms, with elections in between.

IFA branches in Galway and Limerick called off planned demonstrations outside the meeting at the organisation’s headquarters in Dublin following the board’s proposal.

The IFA also looks set to jettison its current policy whereby executive board members can only serve once.

This would mean that existing officers, including regional chairmen James McCarthy, Bert Stewart, Tom Turley and James Murphy; deputy president Tim O’Leary, and acting chairman Jer Bergin, can all go forward for re-election in the spring.

The executive council is made up of county chairmen, alongside commodities chairmen for various sectors such as dairy and livestock.

The deadline for nominations for the position of president is 5.30pm on Wednesday.

Nominations for other national executive positions will continue into February.

Former IFA president Eddie Downey stepped down in November following revelations that Pat Smith had received annual salaries of up to €535,000, before receiving a severance package worth €2 million after he resigned last year.

1 Varadkar resigns amid warning impasse will hit the economy
2 Google completes purchase of Treasury Building for €120m
3 A maverick taking on the Irish whiskey establishment
4 Billionaire Zara founder and German funds vie for prime Dublin offices
5 Garda mobile contract win causes concern over Eir’s use of Huawei kit
6 How can I view my dead brother’s will if I’m not the executor?
7 AIB lines up former HSBC executive McDonagh as chairman
8 Knock gets visit from world’s largest passenger plane
9 Nineteen staff made redundant by Nama share €1m
10 Appeals board grants planning for 354 Greystones homes
Real news has value SUBSCRIBE