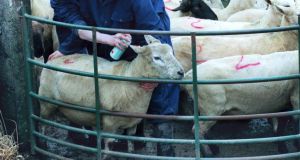 A spokesman said the Health and Safety Authority would welcome the opportunity to meet with the Oireachtas Committee on Agriculture to discuss farm safety and its strategies for dealing with what was a serious issue. Photographs: Eric Luke/The Irish Times

The Health and Safety Authority has agreed to appear before the Oireachtas Committee on Agriculture next Thursday [JAN 29TH]to face questions about its planned reduction in farm safety inspections.

Its programme of work published this week shows a planned reduction in farm inspection targets from 2,900 in 2014 to 2,300 for 2015. It said it was redirecting resources within the farming sector in order to be more effective.

A spokesman said the authority would welcome the opportunity to meet with the committee to discuss farm safety and its strategies for dealing with what was a serious issue.

He said the authority was rebalancing its resources with the aim of having a greater influence on the approach of farmers to safety measures.

“It is designed to free up inspectors to attend discussion groups, where we hope to achieve direct contact with up to 1,000 more farmers,” he said. “It is hoped that the involvement with discussion groups will achieve real sustainable long-term change and greater impact.”

Last year was the worst year for farm deaths in the State since 1991. Thirty people died in farm incidents in 2014.

The first farm fatality of the year in this State was recorded on Wednesday when Johnny Ryan, father of Kilkenny hurling star Lester Ryan, was crushed by machinery on the family farm in Clara, Co Kilkenny.

A man also died in a farm incident in Northern Ireland this week. He fell from the roof of a farm building near Craigavon, Co Armagh, during construction work.