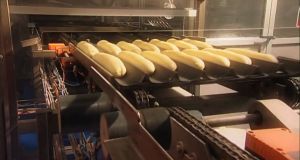 Gallaghers Bakery, a family run business in Co Donegal, is to create 70 jobs after winning a multi-million euro contract to supply its gluten-free bread to up to 10,000 outlets in the US and Canada.

The company, established in 1968, employs 300 people at its bakery in Ardara. The business, which entered the gluten-free market in 2012 with its PureBred and Promise Gluten Free brands, exports its products across the world.

Export sales for the company, which counts Marks & Spencer and Sainsbury’s as customers, rose to €18 million last year from €5 million in 2013. Gallaghers is targeting increased sales of €50 million over the next three years. It said the new contract would bring sales up to about €20 million.

The company’s recent success is all the more impressive given that it nearly closed down in 2011. It was saved after managing director Declan Gallagher, son of the founder Frank Gallagher, bought back the business from what was then IAWS, which had acquired it in 2007.

IAWS, now Aryzta, planned to relocate the business to Dublin with the loss of 189 jobs before Mr Gallagher stepped in with an offer for the business.

“We are all delighted at the success of this recent deal. A lot of hard work and effort has gone in from the whole team here at Gallaghers to bring the company to where it is today,” said marketing manager Aisling O’Loughlin.

The company, a winner in the Bord Bia Food and Drink Awards, recently received planning permission for a new €2.5 million facility in Cashel. Ms O’Loughlin said that, while Gallaghers was expanding in Ireland, it was also keen on continuing to boost the headcount at its Co Donegal headquarters.

“We are an Irish company. All of our research and development is done in Ardara, it is where we have all our technology and we want to keep the employment here,” she said.