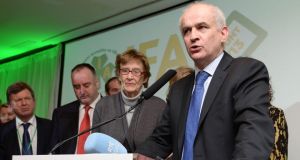 IFA president Eddie Downey has said that “farmers will not tolerate their high quality produce being devalued and their livelihoods being destroyed by supermarkets in pursuit of a quick buck.” Photograph: Brenda Fitzsimons/The Irish Times.

The Irish Farmers’ Association has called for the appointment of a supermarkets’ ombudsman to ensure that farmers get a fair share of the consumer price for their produce.

Speaking at the association’s AGM, its president Eddie Downey said high-quality farm produce had lifted food exports by 45 per cent since 2009 to €10.5bn. “Farm output has driven food exports, and contributed to economic recovery, but farmers are not seeing the benefits in their pockets,” he said.

“I am saying again today that farmers will not tolerate their high quality produce being devalued and their livelihoods being destroyed by supermarkets in pursuit of a quick buck.”

He said product prices had risen, but by nowhere near enough to offset the rise in input costs and the cuts to farm payments “while the constant downward pressure by retailers on our returns is impacting hard”.

Mr Downey called for a stronger regulation of retailers and a ban on below-cost selling “which has been a scourge for our potato and vegetable sector”.

The call for a supermarkets’ ombudsman was part of a new ten-point plan of action set out by the IFA to protect family farms.

The organisation also called for a Government marketing and branding strategy which would deliver a price premium for Irish produce, similar to the premium received by producers of Scotch beef and lamb.

Mr Downey said new farm schemes must be immediately implemented and he called on State agencies such as Teagasc to do more to help farmers become more efficient.

Some 120 farmers are attending the AGM at IFA’s headquarters in Bluebell, Co Dublin. Mr Downey also urged them to “farm defensively to stay safe”.

He said farmers must think about farm safety in everything they do. “It is a dangerous place. We need to go in and farm defensively, think defensively. We have to get a change in attitudes,” he said. “We cannot keep going on losing lives the way we are.”

Last year was the worst year since 1991 for farm fatalities with 30 deaths recorded. The first farm fatality of this year occurred last week when Johnny Ryan, father of Kilkenny hurling star Lester Ryan, died in a machinery-related accident.

1 In this strangest of recessions, what happens next for Ireland?
2 Bank of Ireland sees about 2,000 staff apply for voluntary redundancy
3 Michael O’Leary is the boss you want to lead an airline out of crisis
4 Fortnite owner signs multimillion deal to buy Irish ‘kidtech’ firm
5 Estée Lauder staff at Dublin airport plan further strike action
6 Should I switch bank now with Ulster Bank at risk of closing?
7 Overhaul of lease arbitration regime would be a game changer for retailers
8 Best Covid-19 ‘influencers’ will avoid hectoring
9 Ireland’s Covid-19 economy in five graphs
10 Ireland is in danger of losing the woods for the trees on emissions reduction
Real news has value SUBSCRIBE