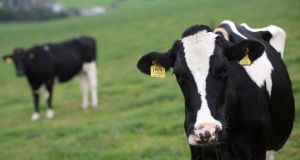 Flag-waving Northern Irish cows aside, the NDC should prepare for spilled milk before this particular debate is over. Photograph: Simon Dawson/Bloomberg

Is milk produced by cows in Coleraine less Irish than milk produced by their counterparts in Cork? Are Northern cows’ technically producing British milk? Or to borrow a line from the Belfast Agreement, are cows which roam across the North free to exercise their choice to be accepted as “Irish or British or both”?

That is a question Ireland’s National Dairy Council (NDC) might consider since it is the only organisation that appears determined to politicise cows – or more specifically, milk – on the island. Its decision to champion a packaging mark – the NDC Guarantee – that can only be printed on milk cartons which contain milk sourced and processed in the Republic, is costing companies north of the Border valuable business in the South.

Major supermarket groups and retailers which support the NDC campaign cannot sell Northern Irish-produced milk because it does not qualify for the guarantee label. The Dairy Council for Northern Ireland has officially complained to the Irish Competition Authority that the NDC Guarantee contravenes European Commission competition guidelines. It has also been in discussions with the EC directorate-general for competition about the issue.

‘Brand Britain’
The debate has also not escaped the notice of the UK’s Department for Environment Food & Rural Affairs, which is promoting a “Brand Britain” campaign of its own.

The NDC Guarantee is not an initiative endorsed by the Republic’s Department of Agriculture. Why would it, when latest industry figures show that exports of dairy products to the UK increased to €960 million last year. The last thing that the department in Dublin wants to do is spark a dairy trade war with the UK.

Meanwhile, firms like Dale Farm, the North’s largest dairy business, may have to look elsewhere for new customers.

But this might not be all bad. Dale Farm’s latest set of financial results show that, despite the NDC’s campaign to block Northern Irish produce, sales actually increased during 2012 and 2013 in the Republic.

Dale Farm is part of United Dairy Farmers (UDF), a dairy co-operative owned by more than 1,600 farmers in the UK. It employs about 1,000 people.

Last year, Dale Farm’s turnover grew 7.4 per cent to a record £228 million and the company also increased its sales of ingredients to £55 million, while commodity product sales grew to £27 million.

During 2012/13, United Dairy’s net debt rose by £7.6 million to £32.8 million as a result of a major investment programme in processing facilities. Dobbin says its investment in new facilities will enable it to respond to a growing demand for its products, particularly for cheese and whey products which it exports worldwide.

“Dairy markets have seen a very strong recovery in the first half of this year . . . from markets such as China, the Middle East and North Africa.

Global recovery
“Having nearly completed a £39 million investment programme, we have increased processing capacity and we are in a really good position to take advantage of the global recovery,” he said.

Dobbin is a firm believer in providing customers with a choice – which is why he is adamant that NI-produced milk should be on the shelf in Ireland but also across Britain.

Flag-waving Northern Irish cows aside, the NDC should prepare for spilled milk before this particular debate is over.