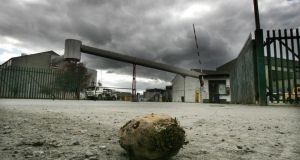 It was just one question in a wide-ranging breakfast briefing, but when Matt Cooper asked Greencore’s Patrick Coveney last week if our sugar beet industry could be resurrected, the broadcaster set the cat among the pigeons.

Mr Coveney was blunt in his answer. “My personal view is that there will never be a sugar industry in this country again in terms of manufacturing,” he said. “If I am proven wrong, I’d actually be quite happy about that but I’d be surprised.”

Mr Coveney was not head of Greencore when it closed its last sugar processing factory, in Mallow, in May 2006 after the EU introduced a temporary restructuring scheme for the sugar industry. But his dismissal of efforts to resume the industry rankled with the two groups now separately trying to get a sugar industry off the ground. It also produced an interesting conundrum for his brother, Minister for Agriculture Simon Coveney, who has been supportive of efforts to resume the business.

Both Coveney brothers were at the UK-Ireland Food Business Summit organised by Teagasc in Dublin the day after Patrick Coveney made his remarks.

When the minister offered to take questions from the audience, the first one was about his brother’s comments. Standing at the back of the room, Patrick grinned ruefully.

Simon Coveney said he believed it was a mistake to close down the industry “and in my view there is more than a possibility that we may be able to recreate…a sugar processing industry in Ireland, but only if it makes commercial sense to do so”.

The two groups working to revive the industry certainly believe it makes commercial sense. Beet Ireland, chaired by Michael Hoey of Country Crest, is a farmer-led group while the Irish Sugar and Biofuels Initiative has several former Greencore and Irish Sugar executives, including Chris Comerford. There is no indication that the two groups will join forces.

Beet grower Allan Navratil, who started the Irish Sugar Biofuels initiative, said the decision to close the industry was ill-judged at so many levels by those who should have known better. “This is clearly supported by the fact that the huge drop in EU sugar production led to a massive rise in sugar prices,” he said. “It is an easy calculation that if the sugar business had been retained, in the period since closure, Greencore would have made many hundreds of millions of Euros, far more than the compensation money received from Europe.” He said Ireland needed indigenous industries “not cardboard companies who can disappear without trace. We had sugar successfully for 80 years and it was irresponsible to close it down”.

Chris Comerford said he was “very surprised and very disappointed” at Patrick Coveney’s remarks and their timing. Negotiations are ongoing in Europe on when the sugar quota regime will be dismantled, with the European Commission favouring 2015, the European Parliament opting for 2020 and the council of agriculture ministers going for compromise with 2017.

Mr Comerford said his group’s research had found the sugar processing industry could be restored and be profitable. “It’s a big investment and it won’t be done easily but I believe if we want the industry back, it can be brought back.”

He said Patrick Coveney was very selective in comparing Irish and French beet yields. “Everyone knows that the Paris basin is the most productive area in Europe for producing sugar… but our yields would compare favourably with those in Scandinavia, with those in Spain and Italy and wouldn’t be far behind the UK.”

His group is now finalising its business plan while Beet Ireland has identified sites which, they say, are in the heartland of the traditional sugar beet-growing areas. They are also planning satellite hubs from where the beet would be transported to the plant.

Its spokesman Pat Cleary said Beet Ireland wasn’t interested in getting into a spat with Greencore about its history in the sugar industry “but I certainly do dispute his thesis about yields”.

His group has been carrying out trials with Goldcrop and said yields were “almost on par with the UK, sometimes better…we are as competitive as anywhere else”.

Mr Cleary also noted the proposed reform of the Common Agricultural Policy would make it compulsory for tillage farmers to rotate crops and said sugar beet was an ideal crop for rotation. “It’s very good for the ground because continuous cereal crops wear out the ground. And the by-product, beet pulp, is a very lucrative animal feed that’s being imported into the country at the moment.”

Up to 75,000 acres of beet were grown before the sector closed down and Mr Cleary said he believed this acreage could be planted again. “Already we have expressions of interest for over half that acreage,” he said. “And that’s before we even launch a site or the date for the ending of quota is decided on. I’ve said it all along and I’ll be proved to be right - we’ll be over-subscribed.”

2017: The date set by EU agriculture ministers for ending the sugar quota regime

2020: The date set by the European Parliament, but with a derogation to allow countries like Ireland re-enter the sector.

1 Opioid executive admits to ‘no morals’ ahead of prison term
2 Pilita Clark: When a rude boss keeps you waiting, why not walk out?
3 Comcast acquires Irish cloud-based telco Blueface
4 NI house builder apologises to Harry and Meghan over adverts
5 Money matters: ‘My father embarrassed us with his haggling’
6 Are there annual limits on inheritances or gifts to a child?
7 UK’s Henderson Park to seek €400m-plus for five prime Dubin office blocks
8 Lack of trust blocking solutions to personal insolvency cases, says ISI chief
9 Restaurants put VAT cuts at the top of their pre-election menu
10 Who are Ireland’s 17 billionaires?
Real news has value SUBSCRIBE