14 food businesses forced to close in May by FSAI 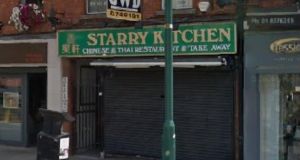 The Starry Kitchen in Drumcondra was one of 14 food outlets to be served with a closure order in May. Image via Google street maps.

Fourteen food businesses were forced to close by the Food Safety Authority of Ireland (FSAI) in May.

This is the highest number of closures in one month so far this year.

The Dragon Taste restaurant in Dolphin’s Barn and Starry Kitchen in Drumcondra were among four eateries to receive a closure order in Dublin.

A closure order is issued when there is likely to be a grave and immediate danger to public health at the food premises.

In addition to a closure order, Mr Ivan Ebbitt of Erne Hill, Belturbet, Co Cavan was served a prohibition order for operating an unapproved food premises.

Dr Bernard Hegarty, the director of service contracts of FSAI, said 40 closure orders and five prohibitions had been issued this year.

“There’s a rising trend overall but 2014 saw a reverse in the trend,” he said.

He told The Irish Times there were fluctuations around the numbers each month.

“Inspectors call in unannounced, these aren’t planned, and then they respond to the situations they find,” he said.

Dr Hegarty said more than 30,000 inspections food premises were inspected each year and owners were given the right to appeal to the District Court if they felt the severity of the sanction was unjustified.

“There can be no excuse for such breaches and negligent practices. They are avoidable when food businesses have proper food safety management systems in place,” she said.

Dr Byrne said every closure order undermined the confidence consumers should expect to have in the safety of their food.

She said this had negative implications for the businesses involved and the wider food industry.

Dr Byrne said the legal responsibility was on the food business to act responsibly and make sure the food they sell was safe to eat.

Of the closure orders imposed last month, thirteen were issued by environmental health officers in the Health Service Executive and one by the Department of Agriculture, Food and Marine.

Seven of the orders have since been lifted.

The worst year for food enforcements was 2013 when 144 closure orders were issued.

Records released by the FSAI under the Freedom of Information Act in December 2014 showed dead rats, bags of cows’ skins and mould-covered mayonnaise were some of the reasons food outlets were forced to close in that year.

Full list of food businesses who were served closure orders: