In a survey of 18 public hospitals, only three had occupancy rates lower than the OECD’s recommended limits 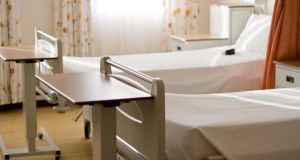 New figures reveal that Ireland’s main public hospitals are still running at a bed occupancy rate far above what is considered safe. An investigation of 18 large acute public hospitals discovered that a majority were operating above the recommended 85 per cent of bed occupancy last year, with an average occupancy of 94 per cent.

“This is the best litmus test of the volume of work facing the health system at the moment,” says Liam Doran, deputy general secretary of the Irish Nurses and Midwives Organisation (INMO). He says patient care is comprised, staff are overworked and procedures are often delayed when a hospital runs at such a high level of bed occupancy.

Last year, the Organisation for Economic Co-operation and Development (OECD) highlighted a number of countries, including Ireland, that were above the recommended 85 per cent limit of safe occupancy.

“This is another measure of the overcrowding which is now endemic in our public acute hospital system,” says Doran.

According to the OECD’s latest data, Ireland had the highest acute bed occupancy rate in the EU, at 92.6 per cent, in 2012. The average bed occupancy among the 17 OECD countries measured was 74.6 per cent that year. Ireland’s rate has increased each year since 2002, when it was 84.6 per cent.

This statistic measures the amount of time that a bed is occupied by a patient in a hospital. It is worked out by dividing the amount of bed days available by the bed days that are used.

This data was obtained from 18 public hospitals, which represents just under 40 per cent of all acute hospitals in Ireland. Acute hospitals diagnose, treat and care for seriously ill or injured patients. Acute beds do not include longer-stay beds for geriatric, psychiatric and rehabilitative care patients.

According to Beaumont Hospital, its occupancy was more than 100 per cent because extra beds were placed on wards to deal with surges from the emergency department.

The HSE said Mullingar’s high bed occupancy was “due to extra bed capacity that was utilised in inpatient areas to relieve the pressure in the emergency department. This is in excess of the allocated bed complement for the wards.”

“The bed occupancy recommendations are there for a reason,” according to Dr Susan Knowles, president of the Irish Society of Clinical Microbiologists. “Internationally, they’ve come up with this 85 per cent [limit] because otherwise you end up with a scenario where staff don’t have enough time to turn patients around and it certainly becomes a patient safety risk.

“Staff need time to clean rooms and medical equipment between patients. Hospital beds also need downtime to allow for standard repairs and upgrade works. These have been factored into the recommended time that a bed is occupied.

“There have been lots of studies showing that MRSA and other multi-drug-resistant organisms increase or are more likely to be a problem in areas where they have overcrowding compared with the standard.”

Dr Knowles says when bed occupancy is high, particularly if it is over 100 per cent, extra beds are often placed on wards “far too close together”.

When this occurs, infections are “likely to transmit much more easily”. This is a concern, according to the microbiologist, who adds, “It’s not just in the recession period. This has been going on for a long time.”

Overcrowding in emergency departments is linked to high bed occupancy as patients must wait, often on trolleys, for inpatient beds to become available. Earlier this year a Health Information and Quality Authority (Hiqa) report on University of Limerick Hospital was critical of its “overcrowded emergency department without isolation facilities for patients with infection”.

The Irish Medical Organisation is also concerned. A spokesperson for the doctors’ union says: “There are signs that the system is cracking under financial strain,” citing hospital bed closures and HSE budget cuts of 22 per cent, or €3.2 billion, over the past six years.

A spokesperson for the HSE says it “was aware of the difficulties being experienced by some hospitals currently and was taking a number of immediate actions to deal with them”.

They also say that through the Fair Deal scheme, it allocated €22 million for enhanced home supports in 2014 in order to reduce discharge delays and improve occupancy levels. “The Special Delivery Unit of the HSE has been tasked with supporting hospitals experiencing capacity difficulties currently.” This includes providing an additional €5 million for home supports to release bed capacity within hospitals.

The Department of Health admits that “in relation to the bed occupancy rates, there’s continued pressure on the hospital system and there has been for a number of years”. It adds that hospitals are trying to maintain a safe and quality service to patients.

Healthcare at a Glance

At the INMO’s last count in August, more than 2,100 beds have been closed over the past five years. These include both acute and continuing-care beds. Ireland has the second-lowest number of acute hospital beds out of 21 EU member states included in the 2012 OECD figures. Ireland, at 2.1 per 1,000 people, has one bed fewer than the OECD average of 3.3 and EU average of 3.5.

Our acute bed shortage has been neglected for years, according to Doran, who says that “senior policymakers have ignored this reality for far too long”. He says the only solution is to increase our acute bed supply; until then, there will be overcrowding.

The INMO has campaigned for additional bed capacity for the past five years, Doran says. “The figures don’t lie. The occupancy rates are increasing and the staffing levels are decreasing as the spiral downwards continues.”

Winter Nights An online festival of conversation, culture and ideas from The Irish Times

1 Fintan O'Toole: The State has never got its head around the pandemic

2 Una Mullally: Government failing to lead us through pandemic

4 Mary Lou McDonald: Government must be active in conversation on a united Ireland