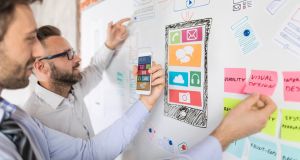 Designing for the future: O’Kane’s view is that Irish publishers must offer competition to Google and Facebook. Photograph: Getty

Ciarán O’Kane, chief executive of WireCorp, is a man known for his market predictions and boasts a decent success rate. Having started his working life in Ireland as a programmer and digital consultant he left for London in 2007 and, during a stint in ad sales, started writing and publishing. What started as a humble programmatic blog quickly gained traction as two things became clear: this was a high-growth area and there were very few people who really knew their stuff.

The business grew, diversifying into ad tech and events. Although he describes it as a “typical digital B2B business” you can’t help but feel he’s being modest. Self-deprecatingly, he laughs as he recalls the “spectacular fail” of one of his early ATS events in Singapore. In June he will return to Singapore to host an ATS event for more than a thousand attendees.

Known for his canny predictions, WireCorp's CEO, Ciarán O’Kane sat down with the Inside Marketing team for this week's podcast to discuss the potential pitfalls and opportunities for marketers in the not-too-distant future. Listen now:

WireCorp, a B2B data and insights business specialising in digital marketing, gaming and online-retail sectors, was co-founded with business partner Rachel Smith. “I’m the show-pony, effectively; she’s the de facto CEO, a talented media exec who understands the global ad business, particularly the APAC market, like nobody else,” O’Kane says. “The company is run by some of the finest talent in the industry, covering and analysing the digital marketing landscape better than anyone,” he adds.

A colourful character, O’Kane is passionate about his business, his industry and ad tech in general. Anyone who listens to the brilliant MadTech podcast will understand the Inside Marketing team’s trepidation about the potential editing job that lay ahead as O’Kane agreed to be our guest this week but as it turned out our fears were unfounded.

It’s almost a cliché now to say that the rate of change in the last two decades has been lightning fast but back then there were only five media, digital wasn’t a channel, there was no Facebook, Google was in its infancy and the only viable alternative to RTÉ was just getting off the ground.

Today, marketing is a lot more complicated: media proliferation had a profound impact on the industry, on talent and skill sets required to work in the profession today. Fundamentals don’t change: the role of client leadership is still important. Twenty years ago, the client leader’s role was to balance the reality of client business requirements with the volatility of agency creative talent. Today, the client lead must have a broad breadth of business acumen while understanding the deep specialist agency capabilities to successfully navigate the marketing landscape for clients.

Over the last few months we’ve covered a broad range of topics in Inside Marketing, whether that’s the importance of balancing long-term brand with short-term performance, Facebook’s resilience, the rise of machine learning or the e-sports phenomenon. Every few weeks we step back from topic specificity and talk to an industry leader and O’Kane’s view on the potential pitfalls and opportunities of the future makes for great listening.

On the issue of Google’s announcement to kill off use of third-party cookies on Chrome by 2022, he gleefully declares: “I predicted this last year.” While that’s true, he agrees the timing was surprising – he expected the announcement in the fourth quarter of this year.

While Google has effectively placed everyone on notice, putting the entire industry in a spin, O’Kane says it wasn’t really a big a shock – he correctly points out that Chrome works independently of the ads team in Google. Although the news was certainly on the cards, many industry experts were taken by surprise, particularly given that Apple’s similar announcement last year to block cookies on Safari effectively saw advertisers shift more spend into Google. As many industry experts scratch their heads and ask why Google would negatively impact revenue without first having a solution, O’Kane thinks the web giant knows exactly what it is doing and sees it as careful choreography from Google to get on the front foot as political pressures mount.

Given the fact that Google’s ad business runs on third-party cookies, this news begs the question as to why now: why not wait until there’s a solution?

O’Kane offers some insight here, he says, in his own inimitable and vociferous way that Google simply does not care about this business – he thinks it will probably “get out of ad tech completely”. It makes sense when you think about the political pressure the company faces around antitrust issues and big-tech’s dominance.

O’Kane’s view is that they’ll offer up their exit as an olive branch to legislative pressures, a sacrificial lamb to show they’re listening, playing fair and are good corporate citizens. It makes sense strategically, he says: the display business is pocket-change, he argues – “They’ve bigger plans for Chrome than just retargeting display.”

In terms of ad revenue YouTube and search is where it’s really at, according to O’Kane, as well as a big play in gaming. He scoffs at a recent Wall Street Journal article that said Google was having “informal conversations” about exiting the ad tech business. “Google don’t have informal conversations,” he says. “They have a 10-year outlook.” His view is that Google will jump before it is pushed.

First-party logged-in data will become invaluable and we’ll see a two-speed digital economy emerge: the authenticated, logged-in web, and the remaining web, built on context. O’Kane thinks this will be potentially positive for Irish publishers. He also maintains it’s good news for agencies, as an inevitable rise in walled gardens across the web effectively makes in-housing more difficult to navigate with multiple separate interfaces.

While publishers and agencies (or any service-layer businesses) will benefit, he predicts a significant contraction in the large number of ad-tech companies currently operating in the middle. O’Kane’s view is that the opportunity for Irish publishers can be realised only if they offer competition to Google or Facebook in terms of scaled offering. He notes examples of publisher consortiums in the UK, Germany and Portugal and urges Irish publishers and media brands to unite and take advantage of the opportunity.

Another major trend about which O’Kane is passionate is Pie theory (programmatic is everything). He thinks we’ll see a massive shift in thinking as programmatic transcends display and becomes a de-facto trading currency for a greater and broader supply of digital inventory.

Programmatic, as it has been defined to date, is synonymous with web-based display but O’Kane expects a fundamental change in how we define and deploy it. In his view he sees programmatic as being about automation and data-driven marketing rather than how it’s currently perceived, as shorthand for retargeting. O’Kane’s view is that all biddable media is programmatic and he predicts some exciting opportunities as traditional channels such as connected television, digital audio and out-of-home advertising digitise their offerings.

It’s an interesting story as to how O’Kane ended up in London doing what he does. He’s clever, his candour and expletives can be disarming but don’t be fooled: within minutes of chatting it’s obvious he knows his stuff and his candid nature makes for very refreshing and insightful conversation. To hear more from O’Kane you can listen to his weekly MadTech podcast or find him on LinkedIn. To find out more about his business go to thewirecorp.com, where you’ll find links to the different brands under the WireCorp portfolio.