Cause marketing, once confined to the boardroom, is now a key pillar of most companies’ brand strategy but consumers are wary of it 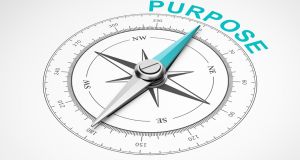 January is trend season and you’ll probably have seen one trend crop up repeatedly – purpose, and specifically purpose-marketing. The fact that purpose is thrown around in the same breath as augmented reality is an indictment itself. Trends, by definition, aren’t immediately visible on the marketing horizon, things to test before reaching mass adoption. Does that sound an appropriate way to describe a business’s raison d’etre?

Firstly, brand purpose is too important to be a “trend”. Secondly, purpose marketing has gone beyond trend status firmly into the era of purpose-fatigue. Purpose used to be confined to boardrooms, never externalised, but today purpose (or cause) marketing has been fast-tracked to key business-pillar status for most companies. Unilever chief executive Alan Jope boldly stated last year that the company will “dispose of any brands in the portfolio that lack purposeful meaning”.

Listen now: In our latest episode of the Inside Marketing podcast, Aidan McCullen is joined by Dave Winterlich, chief strategy officer of Dentsu Aegis and Aarron Chalke of Foe, to discuss the issues around purpose marketing and its place in everyday business.

Too much marketing, not enough purpose

I’m not purpose-bashing, I admire companies with values beyond profits and I don’t believe purpose needs to contradict profit. Purpose doesn’t have to be ethical either, Nike’s purpose is “to bring inspiration to every athlete in the world”, but it seems all purpose-marketing is cause-led and that’s where problems occur. It’s okay to be have ethics while maximising shareholder value. Veja contributes to sustainability and still makes a profit, the raw materials for the brand’s trainers cost more but it keeps costs down by not advertising and it makes a virtue of that.

Purpose is great when it’s real, when it permeates a business and lives throughout the company. There’s no problem with brands having purpose, the problem is when marketing creates it.

When it’s a marketing function it has too much marketing and not enough purpose – it is lip-service, marketing self-indulgence. Brand purpose should be owned at chief executive level, be visible, apparent or conveyed in company culture and behaviour. Only then should it externally manifest itself. But once externalised, much like someone who talks about all they do for charity, it’s open to cynicism.

Without purpose there’s no purpose-marketing

Purpose-marketing without authentic purpose is the tail wagging the dog. There are numerous examples of pseudo-purpose campaign fails, one of the more famous being State Street’s “Fearless Girl”. The bronze statue of a young pony-tailed girl, defiantly standing hands-on-hips staring down the iconic charging bull, was an ingenious idea. This miniature monument to female empowerment, looking almost out of place in testosterone-fuelled Wall Street, quickly became an awards ceremony darling generating huge publicity for the financial firm. But with great publicity comes great scrutiny and, despite State Street’s public display, it seemed its behaviour didn’t quite match this newly-found purpose. The same year Fearless Girl won 18 Cannes Lions, State Street agreed to pay millions in settlements over allegations it underpaid female employees. Although the settlement dated back to 2011 data it’s hard not find the whole thing delightfully ironic. Things got even uglier as it brought legal action against Kristen Visbal, the statue’s creator. Why? She created copies in London, Oslo and Melbourne. She counter-sued. Fearless girl, indeed.

Even the best marketers make occasional missteps. P&G’s “best a man can be” campaign set out to challenge some of the harmful behaviours society deems “masculine”. The well-intended campaign quickly came undone as consumers cried gender inequality. P&G was accused of “pink-taxing”, allegedly charging women 20 per cent more for the same male-version product.

Brewdog has done some great marketing but overstepped the mark in 2018 in attempting to tackle gender discrimination. Pink Brew was a beer, in case it’s not obvious, specifically for women. It was 20 per cent cheaper than “normal” beer in recognition of the fact that women unfairly earn less than their male counterparts. What happened? Apart from being criticised for “pink-washing” in stereotyping women the brewer was successfully sued for gender discrimination after a barman refused to sell to a man.

Act before you preach

Before engaging in purpose-marketing make sure you have a clear (and genuine) purpose. If you’re aligning to higher social causes make sure you have credibility. Soap brand Dove may take a view on how advertising stereotypes women, but I’d be cynical if a bank weighed in here. Brands can stand for social causes, but they must act, not just say. Diageo reducing plastic packaging in take-home products is a great example, a commitment made in recognition of its social impact. The company is not claiming to save the planet but it is doing its bit, making a difference even if it increases costs.

Compare this to when a beverage company’s marketing team cleans up a local beach one afternoon. While it’s better than doing nothing it’s mere tokenism. It’s even less purposeful when used as a team-bonding exercise, less again when it’s an opportunity to create instagrammable content. Taking a stand on societal issues is marketing de rigueur, as evidenced by corporate rainbow flag-waving at Pride Week. A major retailer created an LGBTQ sandwich! But what about every other week of the year? How do you support the LGBTQ community when nobody’s watching, when it’s not earning social currency?

Is it just echo-chamber noise?

We constantly hear that millennials value authenticity and transparency, that they ruthlessly expose brands that break confidence. Channel 4 conducted research (July 2018) on the importance of purpose-driven advertising and its impact on millennials. Some findings were that 55 per cent believed brands should be a force for good rather than just sell; 60 per cent noticed advertising more if it dealt with important issues; 56 per cent would pay more for ethical products; and     41 per cent boycotted brands because they didn’t agree with what they stood for.

Mintel research supported this with 56 per cent of Americans claiming they’d stop buying from unethical brands and 91 per cent reporting they’d switch to brands that support good causes. Based on this you probably think Volkswagen is still recovering post the 2015 “dieselgate” scandal. Not so, it quickly bounced back with record sales in 2017 holding top car manufacturer spot. It seems what we say and what we do differ because, to famously misquote, there’s lies, damn lies and research.

An October 2019 study from social impact consultancy DoSomething Strategic suggested, rather alarmingly to marketers, that people just aren’t buying it. Only 12 per cent of respondents had top-of-mind associations between brands they knew and their specific causes, yet 58 per cent said they were more likely to buy from brands supporting good causes, if they know about it. It seems consumers are being honest, but most purpose-driven advertising isn’t cutting through.

Marketers significantly overestimate the notice consumers pay to them.

Consumers don’t care as much as we think. In terms of consumer advocacy most brands operate on a typical bell curve or normal distribution. At one end there’s a small group who love it, and at the opposite end a small group who hate it. The majority sit in the middle, it’s their default choice but they’d try a competitor on special offer or just as something new. It’s not the end of the world if their preferred brand is unavailable, they move on without disruption. Marketing creates a premium, an emotional preference, often manufactured in the mind of consumers. But when purpose is manufactured to create interesting marketing, it collapses.

Purpose isn’t an opportunity to tailgate culture for promotion, it’s much more important. If you’re tasking your marketing department with defining purpose, then you’re missing the point.