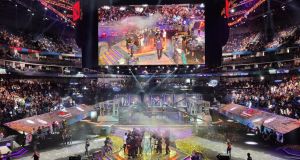 Epic Games ended Season 10 of Fortnite with another one of its renowned live events, a meteor shower ending in a black hole, so for all Fortnite players all their screens have turned to a black hole. A simple black hole. No one can play the game; all they can do is watch this black hole . . .

Avid Fortnite fans are sitting and watching, not daring to move or take their eyes off this simple black hole. More so, they are streaming themselves on Twitch simply watching this black hole, and what’s more, millions of people all around the world are watching these people watch this black hole.

Twitter is exploding with curiosity, wonder and of course funny memes. News outlets around the world from CNN to the BBC are picking up and reporting on this black hole.

How can a video game make millions of people watch essentially nothing for hours and hours? Why does a stream of a black hole get so much virility and intrigue over outrage? How can one simple game make news headlines across the globe and overpower social conversation? How does it have such global impact and create such strong engagement?

In essence it’s because Fortnite is part of the esports ecosystem where gaming is literally the epicentre of a torrent of content including in-game cinematics, live events, influencers, teams, fandom and the most powerful aspect of all; community. And it’s the community that each game, player, team, franchise and brand creates that makes it such a Goliath in the entertainment and sporting industries.

Esports is organised competitive gaming. It can be an organised online event through platforms such as Twitch or a large stadium event. Here, esports players are competing across single or multiplayer competitions on the likes of Fifa, Fortnite, League of legends Dota 2, Mariosmash. Esports is a far cry from your single stereotypical gaming experience, it’s now a serious sport played for spectators, sponsorships and huge cash prizes. For example, the recent Dota 2 international competition 2019 had a prize purse of over $34million, where winners (Team OG) took home more than the winners of the singles finals in Wimbledon.

It is described as the fastest growing sports segment in the world, with over six billion hours of watching time in 2018 alone. Esports analytics firm Newzoo are estimating that the industry will be worth $1.1 billion in revenue by the end of 2020. That’s a growth of 26.7 per cent year-on-year. Of course, it’s of no surprise that sponsorship is contributing to over 41 per cent of this revenue figure where brands such as Mastercard, Vodafone and Intel are taking advantage of this promising new market.

The potential for brands to partner with esports is vast. However, it is crucial they understand the key components of the esports ecosystem, allowing them to not only add value to their audience but also connect in an authentic manner. Key areas of note are: players; teams; franchises; events; digital streaming platforms; influencers/streamers; and of course the title/game itself.

Starting with players, these are the people that actually compete in the esports events. They compete at a professional level within specific titles and top players are then rostered together to create teams. Gaming franchises can bring together several teams that play across multiple titles. Earning potential for these teams and franchises comes from areas such as sponsorship, streaming, and of course competitions themselves. Monster Energy drink saw the opportunity within esports back in 2016, becoming the first ever non-endemic brand to sponsor Team liquid. Team liquid has since become the highest earning franchise in esports, with an earnings prize fund of over $33 million to date.

Esports players have gruelling training schedules both physically and cognitively with the knowledge that one wrong move or click of a button could cost them millions. Irish software research centre Lero, based in the University of Limerick, are opening Ireland’s first esports research lab that will combine health science and computing to identify what makes a great player.

Thanks to Jordan Crowley (the Brian O’Driscoll of the esports world) the Irish flag sits proudly amongst Chinese, Korean, American flags on esports rosters. Not only is he Ireland’s top earning esports player, now playing with New York-based team Splyce on their Call of Duty roster but he is often referred to as one of the most talented players in Europe.

When it comes to the esports events themselves some of the biggest are played in sold-out stadiums across the globe. The Dota 2 international is known for being one of the world’s largest tournaments. This year held in Shanghai, teams compete for one of 18 spots in a series of smaller tournaments known as the Dota pro Circuit. Event organisers and title owners Valve chose an innovative way to increase their prize fund. They created an in game battle pass, and 25 per cent of the earnings of the battle pass went into the Dota 2 International prize fund, effectively crowdsourcing the prize fund.

According to Riot Games, the 2018 League of Legends World Championship held in China drew a record peak of 100 million unique viewers who tuned in for a single match while fans overall watched over 1.2 billion hours of content during the event. Putting this in perspective, these figures now outpace the Super Bowl in terms of viewership.

Ireland has dipped its toe in the arena esport event space with 3rd party esports event organisers Estars and Aeonsports running events to date. Estars most notably ran a League of Legends tournament with three mobile called Three Ireland Estars. Here, nine League of Legends teams represented nine League of Ireland football teams and battled it out to win their spot in the final in the 3Arena.

Encouragingly, Ireland does have a vibrant university esports scene which is organised and supported by the Irish Collegiate Esports; the official representative body for esports competition for all third level students in Ireland. They have a presence in 17 colleges and universities around Ireland and organise leagues and championships across multiple titles. The Irish Collegiate are also battling against their European counterparts. Brands have been quick off the mark to seize partnership opportunities with Irish Collegiate with the likes of Red Bull and Marvin.ie, running food and drink sponsorships with them.

Amazon-owned Twitch is the world’s largest streaming platform for gamers and holds the lion’s share of the esports content. It offers a different viewing experience for users with an integrated chat, where you see real communities and personalities come to life. It’s the perfect culmination of live events, ability to interact, community and fandom. When compared to other social platforms Twitch can still be seen as quite a niche platform in Ireland with only a 15 per cent reach of all internet users. However this nearly doubles to 28 per cent of reach of 16-24 year-olds, with a 68 per cent bias towards males.

These streaming platforms are nothing without streamers, as in the people who stream themselves playing or even watching and commenting on esports. Streamers hold a lot of clout in the esports world, being the influencers of the gaming world. One of the largest streamers Tyler “ninja” Blevin accounted for 50 per cent of the Fortnite Championship viewership on Twitch this year and is the first esports individual to sign a partnership with Adidas this year. Jackscepticeye is an incredibly successful streamer and Ireland’s largest YouTuber with over 22.9million subscribers.

Waking up our sleeping giant

Recent Global Web Index survey highlights how over 175,000 Irish people have watched an esports tournament recently. Putting that in perspective, that’s over three times the size of a sold-out Electric Picnic – one of many cluttered sponsorship events in Ireland.

Enter the new arena of esports, currently on a high growth trajectory which will provide plenty of opportunity within the Irish market. For marketers this should be a welcomed and supported new industry, providing a wealth of opportunity in a cluttered sponsorship environment. However, they must be prepared to invest for the long term and will only succeed if their message is authentic and their contribution valuable.

The Insight marketing podcast is available on Soundcloud