Finalists announced for the 2019 DTS Women in Tech Awards

The second year of the Women in Tech Awards, presented by Dublin Tech Summit, sees three times the number of nominations for Irish female tech leaders 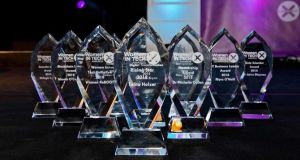 The second annual Women in Tech Awards, in association with Permanent TSB, will take place in the RDS, on the 10th October 2019.

The second year of the Women in Tech Awards, presented by Dublin Tech Summit, has seen the number of nominations triple from the inaugural Awards in 2018, and welcomes Permanent TSB as its headline sponsor.

The Awards recognise the achievements of women working to drive IT excellence, innovation, leadership and success in the tech industry. This year 270 companies have engaged with the Women in Tech Awards, with 368 women from all corners of the country nominated.

This year the most popular categories include Mentorship, sponsored by Fiserv, and Disruptor of the Year, sponsored by Wrike. Tracey Carney, MD of Dublin Tech Summit, says; “The popularity of the mentorship category, and the overwhelming amount of nominations it received, are really testament to the importance of women helping women, especially in a traditionally male-dominated industry such as tech.”

In addition, the introduction of three new diversity categories will shine a spotlight on companies that have truly engaged to make a difference, particularly when it comes to gender equality. The Awards have been judged by a panel including representatives from across a broad spectrum of business, both entrepreneurs and corporate tech leaders, academia and a representative from Enterprise Ireland, sponsors of the Entrepreneur of the Year Award.

Launched in 2018 to celebrate diversity, inclusion and the achievements of women the Irish tech sector, the second annual Women in Tech Awards, in association with Permanent TSB, will take place in the RDS, on the 10th October 2019.

Dublin Tech Summit strives to ensure gender balance with both its speakers and its attendance and continuously makes free tickets available to women in tech. “This Awards continues in the same vein, with free admission made possible thanks to a host of generous category sponsors and headline sponsor Permanent TSB,” states Ms Carney. “We always strive to ensure that we can make DTS as accessible as possible to women in tech and, as a team we felt it was important to us to make this a free event so that it is accessible to every woman who wants to attend, no matter what level they are working at.”

The theatre-style event will include a panel discussion on "How to foster a diverse an inclusive company culture”, featuring, among others, games designer Brenda Romero (pictured above), of Romero Games, winner of last year’s Grace Hopper Award. This year, the special award—named in honour of the late pioneering American computer scientist and US Navy Rear Admiral Grace Hopper—will be presented to Barbara McCarthy, CTO of Ding. With over 20 years’ experience of building best in class software development teams within rapid growth organisations, Barbara was previously Director of Engineering at HubSpot, where she led the expansion of their Engineering team in Dublin. A passionate believer in positive work cultures, she is also a mentor at the 30% Club Ireland (an organisation aimed at achieving better gender balance at all levels of Irish businesses) and is a non-executive board member of the Social Innovation Fund Ireland (an organisation aimed at finding and backing innovative solutions to critical social issues in Ireland).

Another special Award presented on the evening will be the Women In Tech Initiative, sponsored by Version 1, which recognises one not-for-profit organisation that has demonstrated exceptional initiative to promote women in tech. This year, the very worthy recipient will be Connecting Women in Technology (CWIT).

CWIT was founded by Dell, Microsoft and Accenture in 2011 to bring together technology companies with the vision of “connecting and supporting the development of women in the technology industry, now and for the future”. Since then, CWIT has grown to 18 member companies, working with a common objective to attract, retrain and empower women within the tech sector.

For a full list of finalists and more information on the event see womenxtech.com