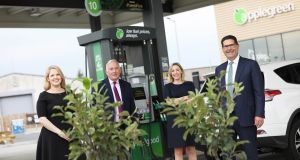 Joe Barrett pauses by the pump while he considers a question that’s less about what his company is setting out to do, and more about the why.

“This is not the beginning and it’s certainly not the end,” he says. “We see this as a speeding-up of our sustainability journey and something we hope and genuinely believe will deliver a positive, lasting legacy for our children and for all future generations.”

We are taking a tour around the forecourt of Applegreen’s Santry outlet in north county Dublin, one of the company’s busiest locations and, significantly, one of over 50 Applegreen service stations around Ireland that offers the advanced premium fuel, PowerPlus.

Barrett, chief operating officer of Applegreen, is talking about his company’s recent announcement that its customers now have the option of achieving 'Carbon Neutral' Driving when they fill their tank with PowerPlus fuel.

“We are highly positive and supportive of the drive towards electric vehicle adoption and will continue to invest in this as the infrastructure evolves,” he says. “This initiative offers our customers a more sustainable choice today and is effectively helping us bridge the gap towards a lower carbon future.

“The need to slow down and stop climate change is so urgent now that we can’t afford to wait another second,” Barrett says. “The UN Sustainability Development Goals (SDGs) lay down a range of targets and challenges and every company including ourselves has a part to play.

“We are a fuel retailer and are aware of the part we play in creating carbon emissions,” he says. “It’s a responsibility we’re taking very seriously, which is why we are determined to drive change and leave a positive legacy. We have a duty to the communities we serve to think and act more sustainably and we are doing that, we’re taking steps to address our most material issues including reducing fuel emissions and moving towards a lower carbon future. This is one of those steps.

“The transition to low carbon transport and cleaner energy is a long-term global objective and we are committed to that, in the meantime, we can offer our customers Carbon Neutral Driving,” the Applegreen chief adds. “We’re driving change because change is needed, that’s how we see it.”

The company’s carbon neutral programme – which it describes neatly as “putting carbon into neutral” – is part of Applegreen’s wide-reaching ‘Drive Change’ sustainability strategy. Its commitment to carbon reduction will see Applegreen investing a minimum of €1.5 million over the next three years to offset the fuel emissions from customers who choose PowerPlus fuel.

Carbon offsetting is a method of ‘compensating’ for emissions produced by everyday activity (like driving) by funding an equivalent carbon dioxide saving elsewhere. Offsetting is a recognised climate action that has been described by the Department of Agriculture as playing a “valuable role” for organisations and individuals who are trying to achieve carbon neutrality.

As of now, anyone who selects PowerPlus fuel will be certified as Driving Carbon Neutral in line with the CarbonNeutral Protocol, an international standard awarded to businesses that are undertaking climate action.

The fuel itself comes with several other perks. PowerPlus includes a special additive that delivers fuel economy benefits of up to 3-4 per cent while also reducing CO2 emissions (by some 3.73 per cent for diesel, compared to unadditized fuel). PowerPlus has also been independently tested and proven to clean and restore engines as the vehicle is driven.

While enhanced performance and fuel efficiency are always welcome, one imagines the opportunity to attain certified carbon neutral driving will be the biggest draw for Irish motorists.

“Yes, we think so,” says Joe Barrett as we watch a steady stream of motorists pulling in to fuel up. “If all customers opt for PowerPlus where it’s available, the carbon reduction initiatives we are undertaking would be the equivalent of removing the emissions of nearly 180,000 cars.

“That’s almost 10 per cent of the entire car population of Ireland, so the potential here is significant,” he adds.

To achieve carbon neutral certification, Applegreen is supporting a clean water initiative in Eritrea and Ethiopia that will offset more than 100,000 tonnes of carbon each year – 300,000 tonnes over the next three years.

In this, Applegreen is working with the international carbon neutral specialist Natural Capital Partners to purchase carbon offset credits from the Irish NGO, Vita. Vita is working to restore community water points in Eritrea and Ethiopia so that families no longer need to burn fuel wood – which results in deforestation – in order to boil water.

Closer to home Applegreen has also announced that it will plant 300,000 native trees in Ireland over the  next three years, including species as diverse as Pedunculate Oak, Birch, Scots Pine, Rowan, Holly and Hazel. This project, which begins in selected locations in Mayo and Limerick later this year, includes planting one tree for every tonne of carbon generated by the use of PowerPlus fuel.

With a minimum of 100,00 trees per year and no upper limit on the number of trees to be planted, Applegreen’s forest creation commitment supports the Department of Agriculture’s Woodland Environmental Fund (WEF).

Back in Santry, meanwhile, Joe Barrett is sipping a coffee (100 per cent Rainforest Alliance coffee; one of Applegreen’s many sustainability actions), still with a watchful eye on the pumps outside.

“This programme is about reducing our environmental impact now while we transition towards a lower carbon future and especially more EVs on the road,” he says. “The option of Carbon Neutral Driving is there now for our customers along with the knowledge that they’re doing something really positive for their communities.”