A tradition worth starting this Christmas

We are at the beginning of a season marked by tradition. Perhaps you could start a new one by giving the gift of warmth and comfort to families forced to flee

A Winter Survival Box costs just €80 and could contain a thermal blanket, food vouchers, a jerry can, tarpaulin to insulate shelter – simple, yet life-saving items. 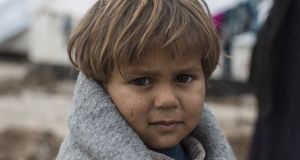 A two-year-old boy called Mahmoud is wrapped up in a blanket provided in an Oxfam winter survival box. Photograph: Sam Tarling/Oxfam

For many, the festive season officially kicked off last Friday when some 1.35 million people across Ireland and beyond donned Christmas pjs, lit the fire and tuned into RTÉ One’s The Late Late Toy Show.

And we carry on from there: waiting until the much-debated ‘right’ day to put up our Christmas tree; sending cards proudly displaying An Post’s annual festive stamp; awkward workplace Secret Santa gift exchanges followed by awkward dancing at workplace Christmas parties; listening to Christmas FM from the minute it goes on air; baking mince pies and Christmas cookies; singing carols and watching favourite movies, alongside videos of Dublin Airport reunions on repeat.

It is a season rich with anticipation – part of the joy comes from doing the same things over and over again, building traditions with the ones we love.

Ireland is not unique in this – all over the world, people mark seasons and festivals with customs special to them.

For the people of Syria, facing into their ninth winter at war, this season is marked not so much by traditions but by the habits formed from almost a decade of struggling to survive.

After eight years of brutal conflict, over half the country’s pre-war population have been forced to flee their homes, with 6.2 million displaced within the country and another 6.7 million now living as refugees elsewhere. Half of all those people are children.

[To give the gift of a Winter Survival Box this season, visit: oxfamireland.org/winter]

Some 350,000 Syrian refugees are living in makeshift camps in neighbouring Lebanon’s Bekaa Valley. They are preparing for another year far from home, trying to cope without essentials like food and clean water. Another year enduring plummeting temperatures, freezing rain and snow. Another year trying to keep their family safe and healthy, despite living in a leaky tent woefully inadequate to protect them from the elements.

As one mother, Asma told us: “Winter used to be my favourite time of the year until I got here. We can’t sleep most nights because water leaks in and makes everything wet. I am very worried for my children. I think of going back to Syria every day.”

For families likes Asma’s, these winter months are full of daily drudgery to make life more bearable, days spent in limbo patching tents with plastic sheeting, collecting water and waiting – for the winter to end, for the chance to go home.

It is also filled with impossible choices like whether to return to a warzone or stay put and endure the winter and all it brings with it, including the terrible fear of getting sick in a place so cold and cruel.

Can you imagine that being part of your winter rituals for nine years with no end in sight?

This is also Oxfam's ninth Christmas supporting people from Syria forced to flee unimaginable terror. We have been on the ground in Syria and neighbouring Lebanon and Jordan since the conflict began.

And this year we are asking for help to urgently provide winter survival boxes for the most vulnerable families.

A Winter Survival Box costs just €80 and could contain things like:

Alongside the traditions already mentioned, another great Irish one is to think of others less fortunate than ourselves - a custom we are continually amazed by and so grateful for.

Perhaps this year, you could start a new tradition – one equally as rich – by buying a Winter Survival Box for the most vulnerable families in Syria and beyond, families at risk of being forgotten and left behind as conflict and disaster outside of their control rolls on.

To give the gift of a Winter Survival Box this season, visit: oxfamireland.org/winter