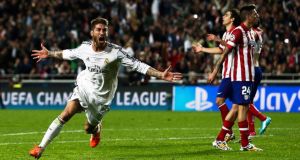 The Atlético Madrid defence is finally breached in the third minute of added-on time when Real’s Sergio Ramos headed home from a corner.

Real Madrid 4 Atletico Madrid 1 (aet, 1-1 after 90 mins): Half an hour after the final whistle in Lisbon, Diego Simeone walked into the press-room and was greeted with a spontaneous round of applause.

It was surprising for the defeated coach to be saluted in such a way, when just a few minutes earlier, the winning manager had been there and nobody had applauded.

Plainly, some of the people in that room felt that Atlético had been more heroic in defeat than Madrid had been in victory.

Simeone had last been seen storming from the arena in a fit of rage having been sent off by referee Björn Kuipers. Now, he had composed himself enough to reflect on the desolation of defeat.

“We’re taught, and we’re told – and I say it – that winning is the most important thing,” he said. “But the support that we’ve just had from our people makes you realise that there’s not just that side to football. It’s not just about winning. I told my players, it’s pointless to cry over this match. Because when you’ve played as well as you have . . .” and here, he tailed off: “all you can do . . . is lift up your head and look forward to next season.”

At that hour on Saturday night you doubted any of his players still had the energy to physically lift their heads. Led with exemplary self-sacrifice by their captain, Gabi, Atlético had left all their strength on the field. Somehow they had summoned the energy to hold out against Madrid’s ceaseless second-half onslaught for 48 minutes. Fifty was two minutes too many.

Central defender
Their nemesis had been Sergio Ramos, the central defender who struts about the field projecting a conquistadore-like persona comprised of equal parts aggression, stupidity and pride.

Sometimes it’s good to have a proud man on your side, even if he’s not the world’s most consistent defender. As early as the 60th minute, Ramos could be seen beating the ground with his fists in frustration at a misplaced pass. The thought of losing made him furious. He put all of that fury into the flying header that beat Courtois in injury-time.

At the final whistle, Casillas planted a lingering kiss on the cheek of Ramos and told him he was “the f**king chief”. The goalkeeper was not the only Real Madrid star feeling relieved. Gareth Bale had endured 90 minutes of hell. In the first half, Tiago’s sloppy pass had allowed him to power straight through Atletico’s exposed centre. A goal seemed certain, but his side-footed shot flew wide. In the second half there had been two more misses, more difficult but in the context of the game, more disastrous.

Shot at redemption
If Madrid had lost the game 1-0, the €100 million man would have been a global figure of ridicule. Instead, Ramos’s equaliser gave him and his team-mates a shot at redemption. When Di Maria’s dribble and parried shot presented him with his fourth chance of the night, he took it in style with a glorious soaring header.

“It’s hard to describe what it felt like,” Bale said later. “Everyone deserves all the credit that they get. Seeing all the fans and all the players run over, it was an amazing feeling.”

Maybe Bale had been too overcome with joy to notice the exception. Alone among the players and substitutes of Real Madrid, Cristiano Ronaldo had not joined Bale’s celebrations in the corner, apparently preferring to saunter around the centre circle among the desolate Atlético players.

The strange scene reminded you of another time Ronaldo had looked out of step with the moment. In 2008, in Moscow, Edwin van der Sar saved Nicolas Anelka’s penalty to win the Champions League for Manchester United. As the other United players ran to celebrate with their goalkeeper, Ronaldo, who had missed his own penalty, fell to the ground and wept.

Last night, a generous interpretation was that Ronaldo was impatient for the match to restart so that he could get on with scoring the goal without which he would consider the victory to be incomplete.

But it did look rather as though he was annoyed that Bale and not he had scored the goal that won La Decima. From his personal point of view, it was perhaps understandable. Ronaldo has carried the hopes of Real Madrid for five years, but he had never before led them to the Champions League final, never mind scored the winning goal. And now Bale, who last year took the honour of being the world’s most expensive player, had won the Champions League for Madrid at his first attempt.

Bale denied there was any resentment from Ronaldo. “No, we work well on the pitch together,” he said. “Anybody will tell you no matter who scores the goals we are all happy to win trophies. He obviously got on the scoresheet tonight and that was important for us.”

Without this trophy, his move to Madrid would have been judged a failure. With this goal, he had become only the second player after Velibor Vasovic to score in European Cup finals for two different clubs, and the first to do it in the Champions League era. He had established a phenomenal new Champions League scoring record of 17 goals that should last a long time. He’ll set no records for sportsmanship, but nobody’s perfect.

Of course, Ronaldo is still only 29. Maybe with time he will develop the sophisticated perspective of his 54-year-old coach, Carlo Ancelotti, who was celebrating his fifth European Cup win, having won it twice as a player and twice as a manager with AC Milan.

Ancelotti also suffered a shattering defeat in the 2005 final. Experience has inoculated him against every extreme of footballing emotion so that it is difficult to imagine the circumstance in which he would get carried away. With a gold medal hanging round his neck, he radiated the quiet satisfaction of a man who had parked on a double yellow line and returned to find his car had not been clamped.

“Happiness is giving happiness to those that follow us, day in and day out,” Ancelotti said. “Madrid fans are extremely happy, and that’s why we’re happy too.”

1 Gordon D’Arcy: There’s more to Saracens’ success than money
2 Seán Moran: Total disregard for schools as GAA votes one way and acts in another
3 David McCann eager to begin Ireland’s U-20 Six Nations defence
4 Leona Maguire and Stephanie Meadow embark upon historic 2020 season
5 10-man Arsenal show their heart to rescue a point at Chelsea
Real news has value SUBSCRIBE
Crossword Get access to over 6,000 interactive crosswords