Roy Keane and supporter in altercation at Ireland team hotel

The FAI have released a statement through manager Martin O'Neill stating that Roy Keane has their "full support" over an incident that occurred in the team hotel last night. Video: FAI 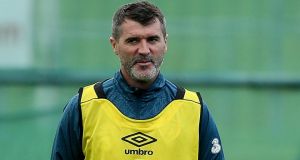 Roy Keane: the FAI claim he called gardaí after the incident. Photograph: Inpho

Gardaí are investigating an alleged fracas involving Republic of Ireland assistant team manager Roy Keane and a supporter. The incident is said to have occurred outside the Portmarnock Hotel and Golf Links, where the Irish soccer team is staying ahead of its international match with Scotland in Glasgow tomorrow.

A group of supporters had gathered last night outside the the hotel in north Dublinin the hope of seeing members of the Irish set-up.

It is alleged that a scuffle broke out after an object was thrown from the crowd.

A supporter claimed he sustained an injury during the fracas and is believed to have been taken away for medical treatment.

Gardaí were called to the scene but have not yet received a complaint from any of the parties.

This morning the FAI have issued a statement, through manager Martin O'Neill, giving their backing to Keane.

O'Neill said: "The FAI and I have been fully briefed about the circumstances of what happened at the team hotel last night.

"Roy asked that the Gardai be called and he has notified them of what happened. While this process is ongoing we are unable to say more at this point.

"However I can say that after being made aware of the facts  Roy has both my full support and the full support of the FAI and John Delaney.

"We are now focused as we have been all week on the game in hand and we won't be saying anything more about this issue."

The Irish squad is due to train in Malahide for the last time today before flying to Glasgow for tomorrow’s European Championship qualifier against Scotland.

It is not the first time that the team’s base in Portmarnock has been the scene of an incident around international games, with an armed robbery at their hotel having previously occurred while the players were staying there.

The incident may come as a distraction as Ireland manager Martin O’Neill and his players prepare for the vital European Championship qualifier.

Ireland have made a strong start to their qualification campaign with an away win in Georgia and a draw against world champions Germany in Gelsenkirchen last month.

Keane was a surprise appointment as assistant manager when Martin O’Neill succeeded Italy’s Giovanni Trapattoni a year ago. At the beginning of the summer Keane was linked with the then vacant Celtic manager’s job. He subsequently took on the role of assistant to Paul Lambert at Aston Villa.